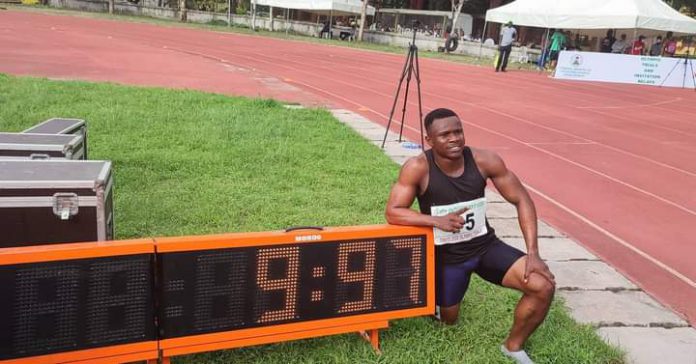 Enoch Adegoke yesterday qualified for next month’s Tokyo Olympics after running a new Personal record of 9.97 (1.2) which was rounded off to 10.00s to become the 4th Nigerian to qualify for the men’s 100m and 12th Nigerian athlete to secure qualification.

Adegoke who is officially the fastest man in the world so far this year following his 10.16 seconds 100m run at the Athletics Federation of Nigeria (AFN) All-Comers competition held at the Sports Ground of the FUTA Akure edged Itsekiri Usheoritse and Seye Ogunlewe first place finish at the Yaba Tech Sports Complex.

And while speaking on the feat achieved, he said

“It was awesome. It’s the time of Joy and excitement. I really thank God for it.”

“Coming for the trials I have like three to four targets:

I want to meet up with the standard.
I want to run in 9 secs and
I want to win the 100m.
God so good I think I met the targets except for the 9 secs but then it was a time I really wish to come and God did it for me, I really thank Him.

“Alaba is very good friend of mine, he is in a very great shape but then he had one or two health challenges and he was unable to finish the race but I’m confident if he’d finished the race he would’ve gotten at least a third place finish but I believe he’ll back stronger by God’s grace,” he said when asked about Akintola Alaba.

“Every other persons I ran with are very strong people and did give me a push.”

If Raymond Ekevwo was to be here would you have would done better than you did, Adegoke was asked:

“In recent years Athletics is not predictable, anything may happen. I might have won it and might have not, so if he’d been around, it would’ve been a very great competition. He is a great guy no doubting the fact and then them not being here I don’t really think changes anything much. If he is around, it would’ve been a very much time to compete with each other and push each other the more but thank God for the achievement we had.

And asked about the 4X100m relay qualification ticket, he responded:

“We’re talented and I think we’re good to go. We all try our best and leave the rest for God.”