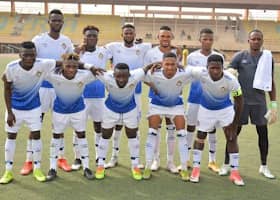 The management of Kwara United Football Club has confirmed the signing of 11 new players ahead of the commencement of the 2021/2022 Nigeria Professional Football League (NPFL) season.

In the breakdown made available to the Media Team, eight of the players were signed outrightly from various clubs, two of them joined on loan, while the last player, an U-17 player, Muritala Lateef, was drafted in from the youth team.

The two players that joined on loan are Adebambo Adebola, from Aseami Sports Management Limited, and Chinedu Udeagha, from Wikki Tourists FC of Bauchi state.

The others are Abdulkadri Samad from Enyimba FC of Aba, Amaefule Chizoba from Heartland FC of Owerri, Ubakanma Peter from Mountain Top Football Club, MFM FC of Lagos, and Tiza Samuel from Lobi Stars FC, Makurdi.

It would be recalled that Kwara United FC retained the services of 28 players, and also placed 19 on transfer market at the close of the recently concluded 2020/2021 season, after finishing third on the official table of the NPFL.

Altogether, Kwara United FC have signed 38 players for the forthcoming season, including three youth players, Sulaiman Mojeed, Monday John, who part part of the last Golden Eaglets team to the Africa Junior Championship, and Murtala Lateef.
Four of the players are currently in the Super Eagles Team B camp. They are Murtala Lawal, Captain Chris Nwaeze, Stephen Jude and Afeez Nosiru.

Meanwhile, the Chairman of the club, Kumbi Titiloye has warned the players against gambling, even as he charged them to remain disciplined on and off the pitch, so as to enjoy the overall benefits of their sacrifice.

Titiloye, who stormed the team’s training session this morning in company of the Commissioner for Works, Engr. Rotimi Iliasu, tasked the players on professionalism, and to also take cognisance of the club’s ambition for the upcoming season.

Also addressing the players, Engr. Rotimi Iliasu said that the team has raised the profile of the state in sports. He tasked them to build positively on the records created last season, as he assured them of continuous government support.

Why PFAN Will Boycott NFF Extra-Ordinary Congress In Benin – Secretary...