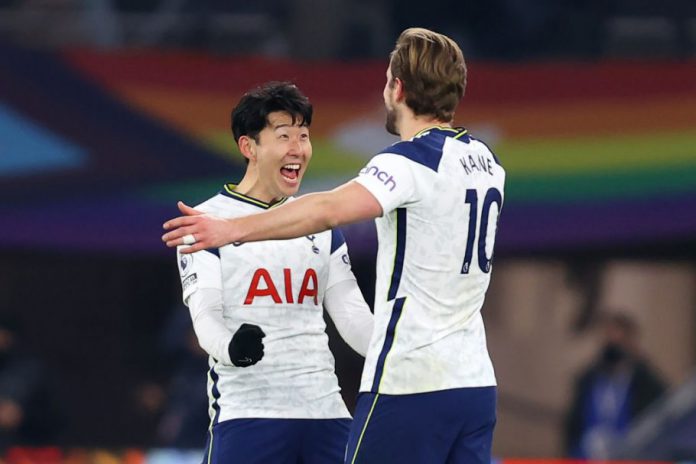 Spurs headed into the tie sitting 8th in the Premier League table. But, after Liverpool dropped yet more points earlier in the day, Jose Mourinho and co. were aware that they would move above the champions with a win over Palace.

The Lilywhites, after a rocky patch, had also begun to find some form of late, picking up key wins over Burnley and Fulham.

As for Crystal Palace, they had managed just one win from their last five ahead of the club’s trip to the Tottenham Hotspur Stadium, and with 34 points already amassed, have very little to play for over the remainder of the campaign.

So, it didn’t come as too much of a surprise when Spurs took the lead less than 30 minutes in.

Roy Hodgson’s side were set up very well, and did their best to prevent Spurs carving out any clear-cut chances.

However, the Eagles could do little when Lucas Moura won the ball back, before playing in Harry Kane, who cut it back to Gareth Bale for his 5th goal in five games:

Gareth Bale scores his fifth goal in six games after being picked out by Harry Kane at the far post.

Despite having created virtually nothing in the first-half, though, Palace actually drew level right before the interval.

Luka Milivojevic floated a lovely ball into the box. Christian Benteke then rose well above Toby Alderweireld to draw the away outfit level:

Christian Benteke towers over Toby Alderweireld to power an effort into the top corner for the equaliser!

It took Tottenham less than four minutes to regain the lead in the second-half, though.

And yet again it was Harry Kane and Bale who combined to strike.

Sergio Reguilon whipped a lovely ball across the Palace box, which Kane headed into the path of the Welshman for his second of the day.

Spurs then added their 3rd, all but killing the game off, just moments later.

Bale played in Matt Doherty, who cut it back to Kane on the edge of the box, before the Spurs hitman bent a sumptuous effort past Vicente Guaita:

“An absolute beauty from Harry Kane!”

Harry Kane adds to his two assists for Gareth Bale by scoring a sublime first time effort from the edge of the box!

Kane went on to add his second 76 minutes in, with Heung-min Son this time having set up the forward:

The strike means that Kane and Son have now combined for more goals in a single Premier League season than any other duo in history:

@HKane and Heung-Min Son have now combined for more goals in a single season than any other duo in @premierleague history!
#THFC ⚪️ #COYS pic.twitter.com/WmyA7i8W6i

The final whistle eventually blew in north London with the score at 4-1. Sunday’s victory saw Spurs climb up to 6th in the Premier League table, just two points adrift of 4th placed Chelsea.

And though a number of players – such as Kane and Reguilon – impressed versus Palace, Gareth Bale’s form understandably proved a key talking point post-match.

After a poor season in Madrid last time out, followed by a slow start to life back at Spurs, the 31-year-old looked past his best.

However, recent weeks have seen Bale edge ever closer to his deadly best, with the Welshman having now racked up six goals and three assists in his last six appearances.

Sonny LOVES a goal against Palace! 5 OF THE BEST | SPURS V CRYSTAL PALACE

Listen to Mourinho on the touchline during Fulham win! MOURINHO CAM | FULHAM 0-1 SPURS

Why Gabriel Martinelli is missing from Arsenal’s matchday squad to face...

Salah: I Want To Be Best Player In The World