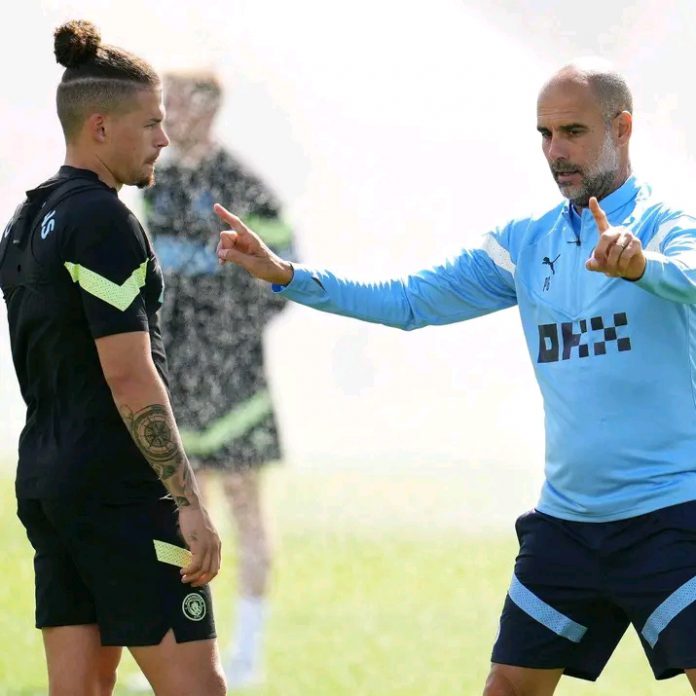 Pep Guardiola has criticised Kalvin Phillips for returning from the World Cup “overweight” and said the £45million midfielder isn’t in a good enough condition to even train with Manchester City at the moment.

Guardiola said his discussion with Phillips would remain private but the England midfielder didn’t train with City on Wednesday, when the four other players who had been away with the Three Lions returned to the Etihad Campus.

Phillips wasn’t in the squad to face Liverpool in the Carabao Cup on Thursday and Guardiola has revealed that the shape he has returned from Qatar in is keeping him out of the picture at the moment.

“He’s not injured. He arrived overweight. I don’t know [why]. He didn’t arrive in the condition to do training sessions and to play,” said Guardiola.

Phillips played 42 minutes in Qatar, coming on against Wales and Senegal after only recently recovering from a shoulder injury, but he did train with England at their Al Wakrah base throughout the tournament.

After being knocked out by France on December 10, City’s England contingent were granted 10 days off before reporting back for club duty.

Phillips has played just 57 minutes of competitive football for the Blues since joining from Leeds United in the summer. He aggravated a long-standing shoulder problem in a friendly against Barcelona at the end of August and was eventually forced to go under the knife to correct the issue.

The 27-year-old made his return to action for City just before the World Cup, playing 41 minutes of the Carabao Cup third-round win against Chelsea, but his lack of availability means Rodri has started 20 of the Blues’ 23 games this season.

“When he will be ready, he will play, because we need him, we need him a lot,” he said.

Asked if Phillips’ returning to the club overweight was disappointing, Guardiola said: “It’s a private conversation with Kalvin.”

LISTEN: AfriForum to start own power company and save South Africans...

Troost-Ekong: Nigeria ‘Look To Rebuild’ With Friendlies In USA