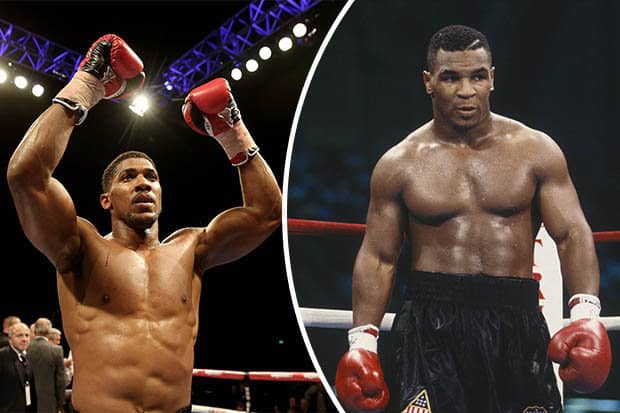 ANTHONY JOSHUA has revealed Mike Tyson to be his favourite heavyweight of all time. Iron Mike struck fear into the hearts of heavyweights around the globe during his rise to superstardom in the ’80s and his subsequent reign as undisputed champion.

The legendary career of the late and great Muhammad Ali, however, always comes to the fore in the heavyweight GOAT debate.

Ali’s impact inside and outside of the ring holds a special place in AJ’s heart, although the mystique and ferociousness of Tyson is something he can’t “put into words.”

When asked who his favourite heavyweight is, he said: “Mike Tyson.
“But Muhammad Ali, obviously, he’s a GOAT in an out of the ring. What he embodied, the people fought [and] the run he had fighting top tier fighters.

“Archie Moore, George Foreman, the list goes on. He fought the best of the best and did it all.” Although they were complete polar opposites, Joshua believes Tyson’s impact on the sport was similar to that of Ali.

The two-time unified heavyweight champion told iFL TV: “But Tyson [also] had that effect that Ali had. “I listened to a talk from the late, great Emmanuel Steward who said, ‘You had six-foot five guys trying to bob and weave like Mike Tyson.’

“Mike Tyson, for me, just phenomenal, just phenomenal. I can’t even get the words out. He’s my number one.” Joshua, 32, is currently gearing up for a crunch rematch with Oleksandr Usyk on August 20.

AJ was turned over by the slick southpaw in their Tottenham tussle last October and is hellbent on getting revenge on the Ukrainian.

He said: “The fight with Usyk, he bust my a** for some rounds. I have to take that defeat like a man as well. I hold myself accountable. “I’m someone who can admit when I’m wrong and hold my head high when I’m right.

“The fight in September, he was right, and I was wrong. Simply, I have to reverse that role on August 20th.
“I don’t like to overcomplicate the situation because there’s simplicity in genius.