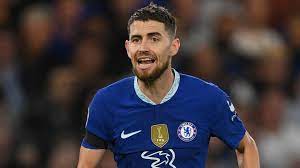 Chelsea midfielder Jorginho is reportedly set to leave the club for free at the end of the season.

The Italian midfielder’s contract is set to expire at the end of the current Premier League campaign.

And the Blues are willing to let his deal run down as they prioritise deals for N’Golo Kante and Mason Mount, according to The Telegraph.

Jorginho is currently free to discuss terms with clubs abroad and the report suggests that he is more likely to return to Serie A or move elsewhere than stay at Stamford Bridge.

That is unless Chelsea offer him a big new deal to convince him to stay.

He joined from Napoli for £50million in 2018 and helped the club win the Champions League, Club World Cup, Europa League and the UEFA Super Cup.

However, much like the rest of the squad, he has been below par this season.

The Blues have multiple players’ contracts winding down and have more hope of agreeing a deal with the other two midfielders.

Kante is yet to play for new manager Graham Potter due to injury, but he is still rated as one of the best in the world in his position.

The Blues believe he is more likely to agree on a fresh deal rather than leave as a free agent in the summer.

Mount, on the other hand, is contracted to the club until the end of next season.

Chelsea are keen to tie down the England international on fresh terms and remove the risk of losing him to a rival.

The Blues are already lining up replacements for the Italian and have draw up a five-man shortlist of targets, including England duo Jude Bellingham and Declan Rice.