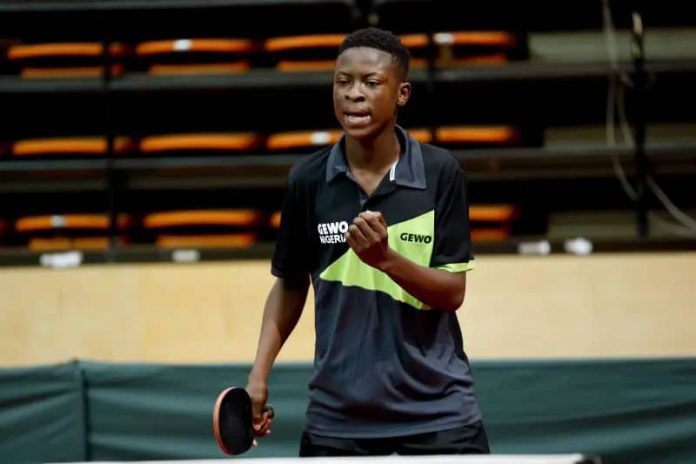 The second edition of the ITTF Africa Western Region Championship kicks off on Monday, November 1, at the Molade Okoya-Thomas Hall of Teslim Balogun Stadium in Lagos.

Host Nigeria slugged it out with Ghana, Côte d’Ivoire, Benin Republic, Togo and Liberia at the four-day championship with teams competing for honours in seven events.
Already, the stage is set as Nigeria named junior sensation Samuel Boboye as well as Azeez Solanke that will spearhead Nigeria team for the championship while national champion Fatimo Bello will lead the women’s team at the tournament.

Men’s singles defending champion, Oba Oba Kizito flew in from Paris in his bid to defend his title while Bello will also be wading contests from Ghana and others in her quest to hold on to her Women’s singles title.
According to the Secretary General of ITTF Africa Western Region, Germain Karou, all is set for the championship as teams have arrived and the venue is set to host an epic tournament which marks return to competitive action in the region.

“We are happy that our region is getting back to action after the COVID-19 pandemic which prevented the staging of the tournament in 2020. But as usual Lagos being the host of table tennis will be treated to exciting matches from teams and players from the region. It promises to be explosive as some of the players are ready to clinch the titles in the absence of the top players like Quadri Aruna in the region” Karou, who is also the President of Cote d’Ivoire Table Tennis Federation said.

For the chairman of the Lagos State Sports Commission (LSSC) Sola Aiyepeku, Lagos is ready to host the tournament in compliance with COVID-19 protocol.

“We will do everything to show our visitors ‘This is Lagos’ by ensuring you enjoy your stay in Lagos and partake in an exciting hitch-free tournament. More importantly, creating a veritable platform for our players in Africa to demonstrate and improve their skills will go a long way to continue identifying, promoting and preparing them ahead for future competitions beyond the continent,” said Aiyepeku.

“Don’t get carried away” – Arsenal manager sends warning to fans...