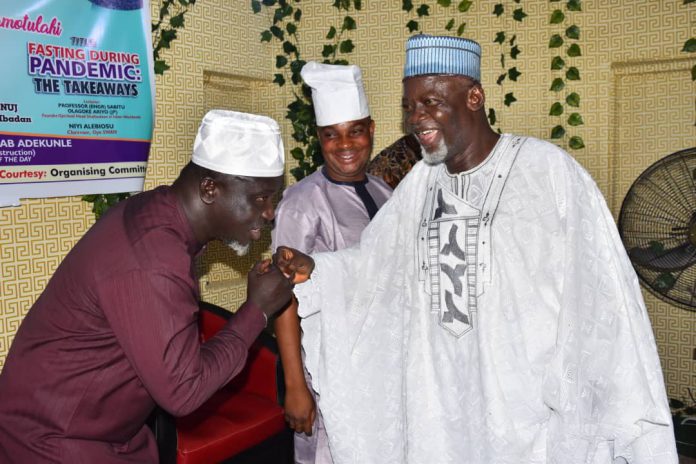 An Islamic cleric, Professor Sabit Ariyo Olagoke has said that Islamic Tenet absolve footballers of fast during a matchday likewise other sports men and women on an important day of action instead of playing a football match or competing in any other sporting activities with Ramadan fast.

The Islamic leader who is the Founder/ Spiritual Head of Shafaudeen in Islam Worldwide, made this call while delivering paper at the 4th annual Ramadan lecture organized by Sports Writers’ Association of Nigeria (SWAN), Oyo State, at NUJ Press Center, Ibadan on Wednesday.

Prof. Olagoke while speaking on the topic, “Fasting during a pandemic: The Takeaways”, said that Islam tenet does not compulsory a Ramadan fast for those that are defending town or nation in a war and sporting activities can be liken to that as “footballers are hired to defend their team in an energy sapping circumstance, and such player can pay back the fast after Ramadan as stated in Quran 4 chapter 212”.

The cleric who has been sponsoring a grassroots football tournament for teams in Oyo State for the past 16 years added that sport is a legitimate way of engaging our youths as supported by Islam hence should be better utilize by our government to curb the prevalent restiveness among the Nigerian youths.

The Chairman of Oyo SWAN, Niyi Alebiosu in his remark thanks people who supported the association to successfully organize the event which includes: Alh. Abdulwahab Adekunle Hamex and Alh. Abdul Ganiyu Hamed, the CEO of Solat Telecoms.

Photos & Videos: The return of MMC Live was truly a...

US Secretary of State Antony Blinken to visit South Africa