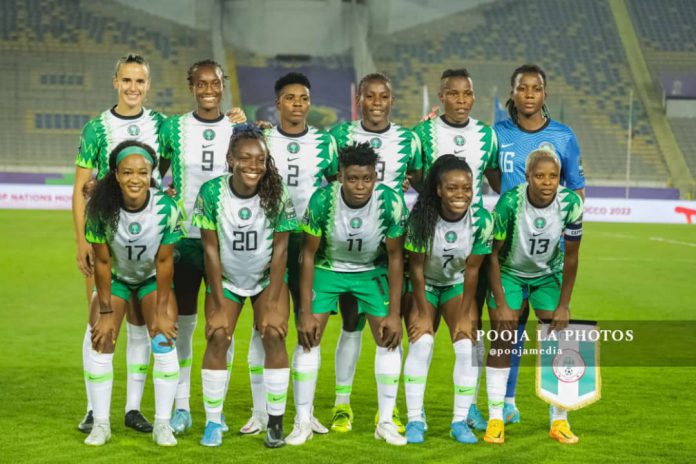 Super Falcons of Nigeria will take on South Korea and Japan senior women national teams in two different international friendly matches in preparations for the FIFA World Cup in Australia next year.

This was revealed by an official of Nigeria Football Federation who pleaded anonymity, he said, “Super Falcons will play two friendly matches in October, a month after playing the World Cup defending champions, USA The NFF has lined up South Korea and Japan senior women national teams to fill the FIFA window for international matches.

Before then, Super Falcons who finished fourth position at the just-concluded African Women Nations Cup in Morocco will face USA in two header friendly matches on September 3rd and 8th.
The friendly matches will help the nine-time African champions to rejig their squad ahead of the eighth FIFA Women World Cup in Australia.

The previous eight FIFA Women’s World Cup tournaments have been won by four national teams. The United States have won four times, and are the current champions after winning it at the 2019 tournament in France. The other winners are Germany, with two titles, and Japan and Norway with one title each.

Australia and New Zealand will host the competition in 2023, making it the first edition to be held in the Southern Hemisphere

World No. 1 To Storm Lagos For ITTF Africa Cup

Shakira Opens Up On Pique Split