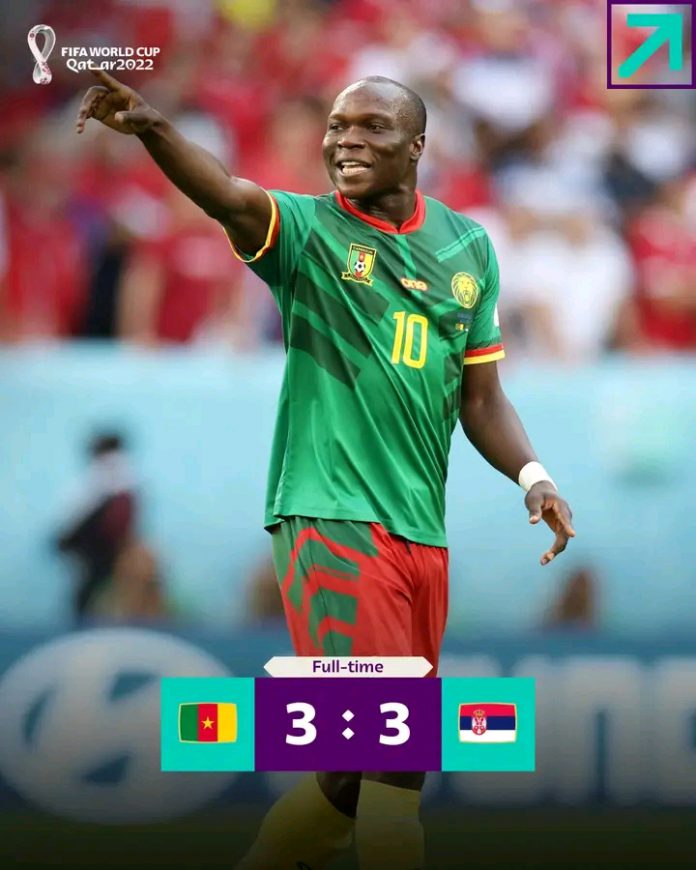 Cameroon kept their hopes of reaching the World Cup last 16 alive as they battled back from two goals down to draw a six-goal thriller with Serbia in Group G.

Cameroon took the lead through Jean-Charles Castelletto but Strahinja Pavlovic and Sergej Milinkovic-Savic replied to give Serbia a half-time advantage.

Aleksandar Mitrovic added a third for Serbia and they looked to be cruising to a win that would have put them in a strong position to progress from the group.

However the Indomitable Lions roared back thanks to Vincent Aboubakar’s superb lob and Eric Maxim Choupo-Moting’s equaliser three minutes later.

Mitrovic had a chance to regain the lead for his side but the Fulham striker curled a shot wide in the closing moments after being teed up by Dusan Tadic.

Both sides lost their opening match so this result leaves them two points adrift of Brazil and Switzerland, who meet later on Monday (16:00 GMT).

In arguably the tournament’s most entertaining game so far, Serbia started brightly and Mitrovic twice went close to giving his side the lead.

He hit the post before flashing a shot wide after the ball fell kindly to him in the box as Serbia made all the early running.

ADEPOJU PLAYS DOWN ON ‘MAFIA’ IN SUPER EAGLES