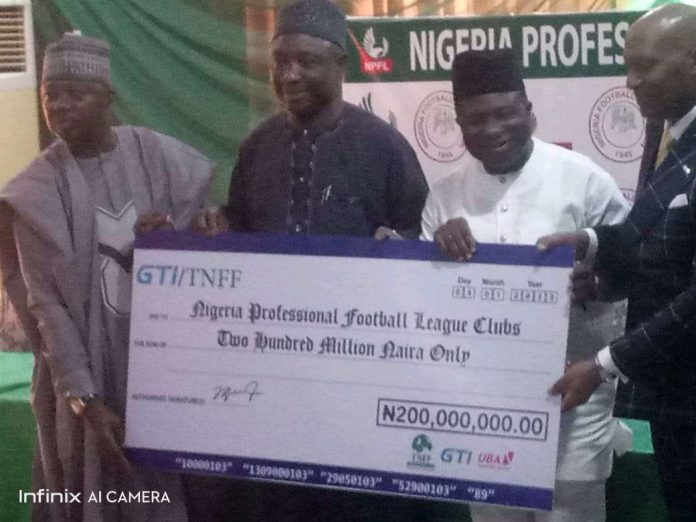 The Interim Management Committee (IMC) temporarily in charge of the Nigeria Professional Football League (NPFL) on Thursday in Abuja handed over a total sum of N200 million to all the twenty participating clubs in the 2022/2023 season.

Each of the 20 clubs in the league received N10 million as a form of support to alleviate their financial constraint.

The financial support is a grant ahead of their participation in the 2022/2023 NPFL Abridged League competition which begins on Sunday.

Though, only Akwa United versus Bendel Insurance will be played while other Match-day 1 fixtures holds a week later.

Others are Kwara United of Ilorin, Gombe United, El-Kanemi Warriors of Maiduguri, Abia Warriors of Umuahia, Bendel Insurance of Benin and Bayelsa United of Yenagoa.

There are also Akwa United of Uyo, Wikki Tourists of Bauchi, Nasarawa United of Lafia, Niger Tornadoes of Minna and Sunshine Stars of Akure.

The rest are Enyimba International of Aba, Remo Stars of Ikenne, Dakkada FC of Uyo, Doma United of Gombe and Katsina United FC.

GTI Group, one of the sponsor of the league donated the two hundred million naira to all the twenty participating clubs.

Speaking at the ceremony, the IMC Chairman, Gbenga Elegbeleye, noted that the development was a fulfillment of the league organising body’s promise.

“We came into being with a promise to improve the state of the competition.

“We are here now to do as promised, giving the participating clubs the sum of N10 million each to help kickstart the season.

“I can promise here again that we are ready to give some money again as the league goes on, in order to help the clubs cushion the financial burden of playing in the competition,” he said.

Elegbeleye then announced that winners of the league, which is going to be in an abridged format, will receive as prize the sum of N100 million at the end of this season.

In his remarks during the cheque presentation, the President of Nigeria Football Federation (NFF), Ibrahim Gusau, said the development was in line with his plan for Nigerian football.

“Before I came in as NFF President, I had said we must get the league right in order to move forward in the game as a country.

“So, the issue of having a premier league that is professionally run is important, and that is what we are seeing with the IMC now. This is praiseworthy,” he said.

Gusau used the opportunity to reiterate NFF’s full support for the IMC, saying the question of playing the 2022/2023 season in an abridged format is a matter of necessity.

“We need to start the league so as to end it early and start the new season by August.

“This way, the players will have time to rest and prepare well for the next season and do better on the continent.

“Luckily for us, IMC has been doing well and the sponsors are set to back them. So, let us give them all the support needed to succeed.

“That is why I will be in Uyo on Sunday to watch the star match of the Match Day 1 fixtures —- between Akwa United and Bendel Insurance,” he said.

The season 2022/2023 NPFL will get underway on Sunday with Akwa United hosting new comers, Bendel Insurance in Uyo.

‘We will be back for sure’ – Mauricio Pochettino’s assistant opens...