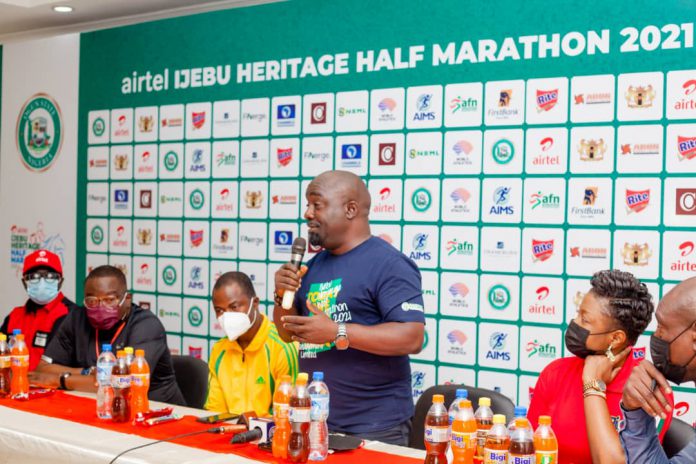 Ijebu-Ode will agog on Saturday for the much anticipated maiden edition of Airtel Ijebu Heritage Half Marathon Race as over forty foreign athletes are taking part at the event.

The race being packaged by foremost sports management company, Nilayo Sports Management Limited (NSML) will also feature home grown Ijebu indigenes and others across the state in the race.

This was disclosed by the organiser at a Works Press Conference held at Conference Hotel, Ijebu Ode, on Friday.

In his opening remarks, Hon. Olopade noted that the marathon was driven by Ogun State government and Ijebu Heritage Group for the development of sports in the zone and state in general.

Olopade, the former Commissioner for Sports acknowledged the roles played by Governor Prince Dapo Abiodun in ensuring marathon races were being held in the state.

He added that he was excited to hold the Ijebu version of the race at this hour, having held similar such at Remo zone and Abeokuta respectively.

In the same vein, governor Abiodun emphasized on the reason for making sports working in the state, as a way to engage the youths positively, and to curb youths restiveness across the state.

He hereby assured athletes, officials and other stakeholders of adequate security during and after the race.

Similarly, Odulaja in his admonition welcomed all the participants to the historic race in the heartbeat of Ijebu land, recalling that they thought that the event would not be tedious, but were able to organise it within four months.

However, he envisaged that in the nearest future, he would be glad to see Ijebu boys and girls competing at the world stage along with the foreign athletes.

Meanwhile, Yusuf Ali, former Nigeria international hereby narrated how the marathon race would hold. Adding that the event is in three categories, and that all the courses were certified by World Athletics.

He stressed further that the event is featuring top class athletes and would start by 8am, noting that there would be no from for cheating as all necessary arrangements to checkmate such have been noted.

Furthermore, he expressed that spy camera, doing exercise would be conducted, while COVID-19 protocol would be adhered to.