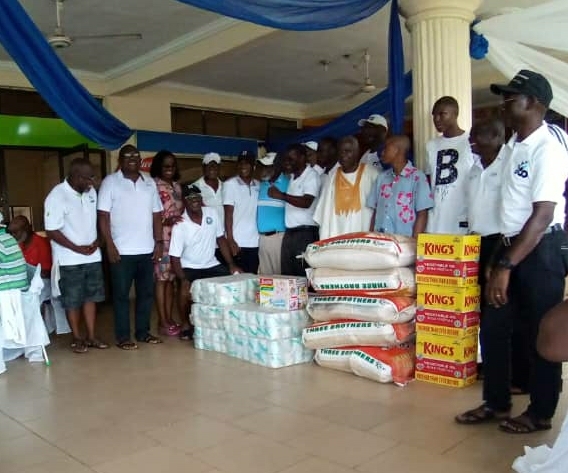 Items worth hundreds of thousands of naira have been donated to Job Orphanage Home by Palle Group, Ibori Golf and Country Club (IGCC), Asaba, Delta over the weekend.

The group under the leadership of Tam Brisibe donated items such as bags of rice, cartons of vegetable oil, packs of Indomie noodles, toiletries amongst other things to the orphanage home at the end of its golf kitty held at the IGCC golf course in Asaba.

Brisibe while speaking at the event where about fifty golfers within the club and from other sister clubs took part, narrated the need to identify with the less privileged and to share parts of what God has given members of the group to help those who were in need.

Brisibe thanked all members of the group and the leadership of the IGCC for the leverage and support to achieve this feat.

At the end of the energy sapping golf kitty tagged ‘Palle Group Kitty For Charity’, the duo of Nelson Obiyio and Edith Umeh were declared champions in their various categories.

Obiyo having played a net score of 77 emerged best in the men’s category ahead of Henry Onianwa who beat Tam Brisibe on count back as they both played 78 net to place second and third respectively.

Similarly, Umeh recorded the best performance at the one day golf event to win the trophy just as the Lady Captain, Hetty Egbai settled for second place with 77 net while third place went to R Iroawa due to her 81 net recorded at the kitty

In the ladies veteran category, Mrs M. Attoh was adjudged winner with a net score of 83, as L. Ogbetou who played 94 net emerged second.

Ben Egonu with 75 net emerged best in the vet men’s cadre ahead of George Ugboma who recorded 76 net to place second having beaten K. Emu who placed third on count back with a 78 net.

The longest drive ladies award went to G. Ogeil while Henry Onianwa won the men’s category, just as nearest to pin men’s award was won by I. Oduah.