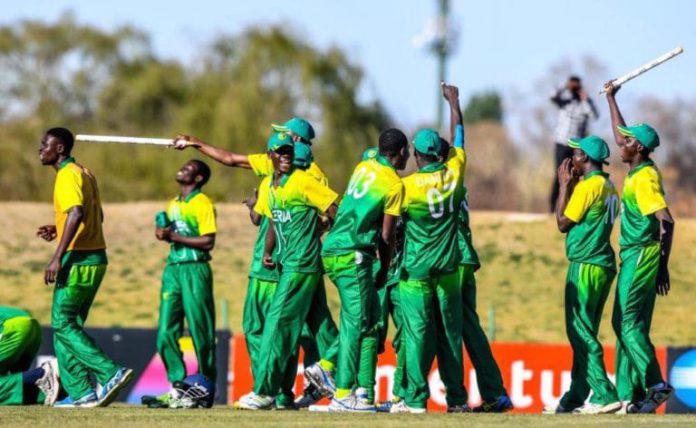 The Nigeria U19 cricket team on Friday continued their brilliant performance at the ICC Africa World Cup playoffs in Abuja as they suppressed Malawi with 225 runs victory.

By defeating Malawi in the semi-finals, Nigeria recorded her 4th unbeaten streak in the tournament.
The West African cricket giant won the toss and opted to bat first.
The regular openers for Nigeria, Paul Pam and Selim Salau had a miserable batting score of 8 runs.
Hope however returned to Nigeria’s bench with Izuchuwku Okeke and David Abiebhode’s entrance to bat.
Okeke batted 84 runs off 98 balls while Abiebhode scored half of a century, 50 runs to keep the team’s moral high. Nigeria’s total score was 258 runs for loss of 9 wickets. It was another glorious outing as the boys played out their 49 overs.
The second inning was the turn of the Malawi to chase 259 runs target, but the Nigerian bowlers were mean and ferocious.
Nigeria’s captain Ridwan Kareem destroyed six wickets in a pack including Malawi’s captain, Phillip Zuze. Okeke also decimated two Malawi wickets to destroy the opponent dream to reach finals.
They severe pressure on Malawi restrained the team to a meagre 33 runs and the batters were ‘all out’ in 12.5 overs.
Nigeria’s U19 Captain’s beautiful bowling spell earned him the Man of the Match award. Kareem was magnificent in his solo effort as he bowled and caught six of his Malawi victims.
With the unmatched victory, Nigeria is now set for destiny with the formidable Kenya on Saturday’s final match.
Kenya had earlier defeated Sierra Leone by 81 runs to qualify for the final.