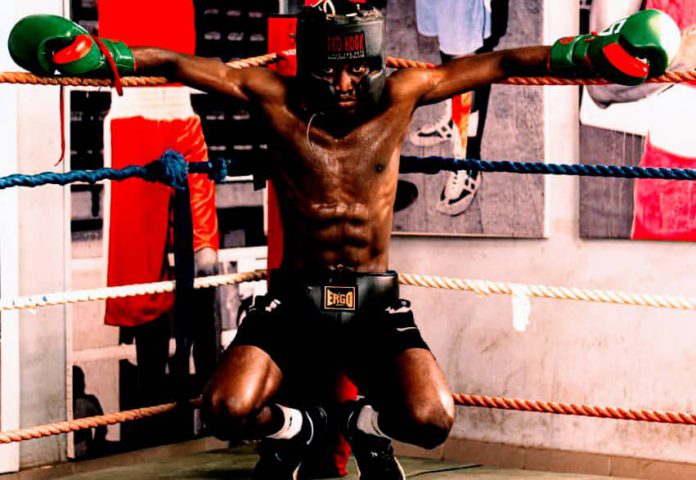 An Ibadan born boxer, Ayanfe Adeoye, who is in super light weight category has won his first professional fight against Ghanaian boxer, Emmanuel Allotey in far away Ghana on May 1st, 2021.

He won by round 5 knockout in a six rounds bout that came up at Lebanon house Accra, Ghana around 5:00pm Nigerian time.

Adeoye, a young talented boxer aged 20 years, popularly known as battleboy, while speaking online from Ghana after the fight said he hard work through training and dedication won him the fight.

He declared he with the level of concentration, training and prayer, he was optimistic of coming out victoriously, and that as promised he dedicated the victory to Almighty God and Nigeria as his country.

According to him, “My ambition is to make boxing move to number sport in Nigeria. I want to be a great example to the younger ones that you can still be a boxer and be a decent person. It’s a sport and not for “thugs” like most people perceive. And most importantly, I want to make boxing great in Nigeria like other greatest Nigerian born boxer.

“I am looking up to the likes of the greatest Muhammed Alli, Lennox Lewis and Sugar Ray Leonard and my brother and a role model, ‘The Champ’ Anthony Joshua”.

Speaking on boxing development in Nigeria, the battleboy said he really put all the blame on the government as government alone cannot do everything but appeal to government to also pay attention to boxing like football because there are lots of potentials and talents in boxing as well.

“I won’t really like to put it all on the government. Even corporate brands can come in and sponsor stand out boxers. It doesn’t have to be financially, but it could be boxing gears, supplement and other training facilities”.

Deadline for debt exchange program moved to February 7 with new...

The latest on Giovani Lo Celso ahead of Tottenham vs Dinamo...