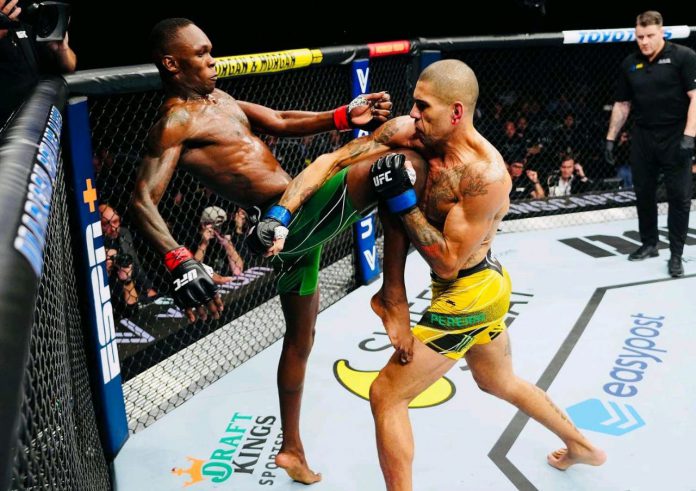 Adesanya, who lost his UFC middleweight belt to Alex Pereira in the main event of UFC 281 in dramatic fashion Saturday, told Ariel Helwani on “The MMA Hour” that his next fight will be against his longtime rival – even if the Brazilian fighter drops the championship to another opponent before him.

“I hope he’s the champion. I’m just saying, hypothetically, if he isn’t, I’ll still fight him,” Adesanya said Monday. “I’m crazy, bro. I can beat him.

“I know I can beat him. You’ve seen I can beat him. He just – I won’t say luck – he just invested well, some good game-playing; he’s a good fighter. It’s my ego, maybe, sure. But I’m allowed. I just believe I’m better.”

Pereira earned a standing TKO over Adesanya in the fifth round to complete a stunning comeback and upset victory.

Adesanya, who had never previously lost at middleweight, was the heavy favorite to defend his title for a sixth straight fight. He was seemingly minutes away from doing so, having won three of the first four rounds on all three judges’ scorecards.

It was Adesanya’s third combat-sport loss to Pereira, who beat the Nigerian-New Zealander twice in kickboxing, including handing him the first knockout loss of his career.

Their shared history and a lack of other opponents for Adesanya meant Pereira was fast-tracked into a title shot despite only having seven previous MMA bouts, with just three of those coming in the UFC.

After the event, UFC president Dana White said he “wouldn’t rule out” an immediate rematch for Adesanya, according to Nolan King and Ken Hathaway of MMA Junkie.

With a new champion at 185 pounds, a host of top contenders Adesanya previously dispatched have new life. Former champion Robert Whittaker and Paulo Costa will have a chance to stake their claim for a title shot in a clash at UFC 284 on Feb. 11.

Champions League: We’ve To Be Clever To Beat Atletico Madrid –...