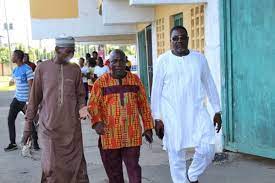 Representative of the southwest zone on the Board of Nigeria Judo Federation, Dr. Musa Oshodi has called on the stakeholders of the sport to join hands in repositioning the game in the country.

Dr. Oshodi, who is a leading candidate contesting for the presidency of NJF in Thursday’s Board, which holds in Abuja, is offering himself for the top job after his 44 years’ experience that had seen him rise through the ladder in various capacities as ab athlete, a coach, a referee, an administrator.
In his manifestos made available to P.M. EXPRESS on the eve of the election, Dr. Oshodi, an honest gentleman, a reliable judoka, a medical doctor, an entrepreneur, and an administrator of note, emphasized the need to develop the Nigerian judo so that the game would take its rightful position in the comity of sports, not only in Nigeria, but also on the global stage.
“My 44 years in Judo has given me an opportunity to assess the past and present of Judo in Nigeria and it is worrisome to note that the rate of development is dismal.
“As a stakeholder, I am saddened and disturbed by the state of affairs in our noble sport.
“Consequently, I have decided to seek the headship of the team that would relaunch the sport and place our great country among Judo superpower on the global stage,” the Obafemi Awolowo University alumnus said.
“I think I owe Judo a debt of gratitude for the role it played in my success story. For me, this is another opportunity to give back to the sport and society that taught me humility, courage, discipline, compassion, honesty, selflessness, and respect for all.
“I am the Chairman of Oyo State Judo Association and a former vice president of Nigeria Judo Federation. I was also a former chairman of the technical and medical committees of the federation,” he said.
In the manifesto, Oshodi reeled out some of what he had done in his capacity to ensure that the game kept going in the past, both at the zonal and national levels, which had impacted the athletes, coaches and other stakeholders.
With the election into the Board of NJF holding on Thursday,(Today), Oshodi in the manifesto tagged “Repositioning Nigerian Judo in the comity of Nations”, listed a seven-point agenda, which he would anchor his administration on if elected as the president.
According to him, he and his team on the Board would pursue vigorously the following: Funding, Human Development, Grassroots Development, Publicity, Regular Championship, Availability of Modern Facilities and Equipment, Regular Board, Congress and Stakeholders’ Meeting to get the job done during his administration if elected.
He said: “The details of this roadmap will begin to unfold from my first week in office. And with the burning action in my heart, we will begin to achieve the milestone before my first anniversary in office.
In conclusion, I would like to appeal to every member of the Judo family to give me this opportunity to serve our sport by your votes. You will never regret doing so for I would give this national assignment my best shot.
“Nigerian Judo will rise again and with all of us working together as a family, all our dreams would be reality.”

Get your blankets out: Intense cold front to hit Gauteng

Marikana massacre: Calls for Ramaphosa to apologise and step aside

Why PFAN Will Boycott NFF Extra-Ordinary Congress In Benin – Secretary...