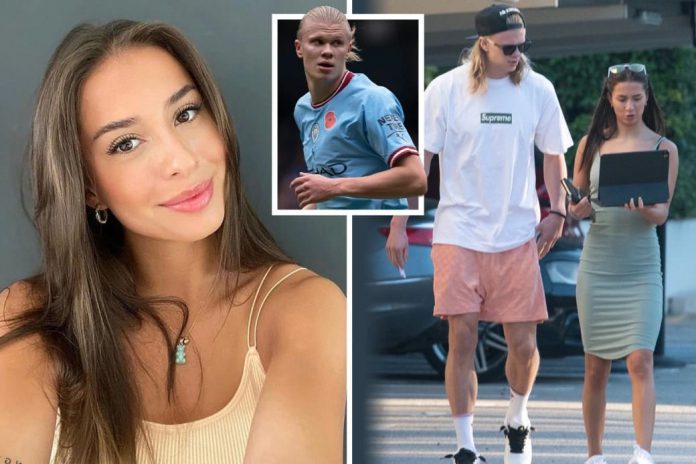 Erling Haaland may not be at the World Cup but the Manchester City forward has kept himself busy after it was confirmed he is in a relationship with Isabel Haugseng Johansen.

The Norwegian star is reportedly ‘smitten’ with the 18-year-old, who is a fellow footballer and comes from the same town as Haaland. The duo have been dating for months and were pictured in Marbella this week as Haaland spends some time away from football after a hectic start to the season.

Haaland and Johansen grew up together in Bryne and have been mutual friends for a number of years, while the pair also played for the same local football club. Images emerged of Haaland with Johansen enjoying their time in Marbella as the City ace owns a villa out in southern Spain.

In the past, Haaland had joked that footballs were his “girlfriends” with the forward netting 23 times in his opening 18 matches for City since his big-money move from Borussia Dortmund in the summer. This has changed now with the former Molde man dating Isabel and the teenager was also previously spotted watching with Haaland’s family in the stands while he was playing for Dortmund.

A source told The Sun: “It seems to be pretty serious. Isabel has travelled to Germany and England to see Erling and now she’s been with him in Marbella. Isabel is well known for her beauty. They’ve always known each other.”

Meanwhile, an insider added: “Erling has the world at his feet – and women queuing up to be his partner. But he’s a very sensible lad and it makes perfect sense he’s with a girl from his home town who he’s known for years. He needs to be able to trust the people in his life and just concentrate on football.”

Haaland, who is supposedly on around £860,000 a week at the current Premier League champions, is on holiday after Norway failed to qualify for the World Cup. He is one of just a handful of senior players not at the tournament, with Riyad Mahrez and Sergio Gomez amongst the others not to be involved in Qatar.

Seventh tier Ashton United set social media alight last week when they announced they were keen on signing Haaland on loan until the domestic campaign returns in late December. The Manchester-based club said that it had submitted an official offer to City to take Haaland for what would be five matches, before Pep Guardiola’s side return to action against Liverpool on December 22.

The offer didn’t get an official response from City, although it was something that attracted plenty of attention on Twitter. Ashton gained more than 10,000 followers and even fans turned up to their Manchester senior cup win over Maine Road to see if Haaland would be involved.