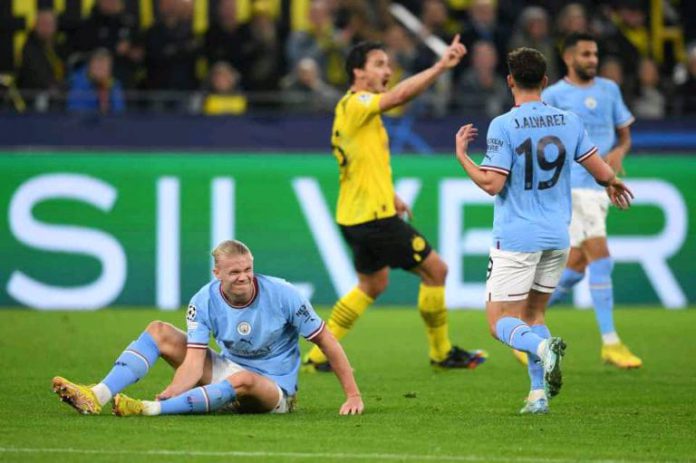 Erling Haaland will enjoy three weeks away from Manchester City once the Premier League halts.

The top scorer, already on 23 goals in all competitions, has been called up by Norway for two friendlies but will then be afforded a further fortnight off by Pep Guardiola.

City’s senior players not involved at the World Cup – including Riyad Mahrez – will jet off for short warm-weather camp in Abu Dhabi along with the club’s youngsters on December 5.

Guardiola has encouraged his players to head away on holiday beforehand, with the City boss planning to spend time in Barcelona with his family after Saturday’s game against Brentford.

While in Abu Dhabi, Guardiola is set to meet Sheikh Mansour alongside chairman Khaldoon Al Mubarak, with his future at the Etihad Stadium on the agenda. Guardiola’s contract expires in the summer.

‘Everything is under control, it’s perfect, the decision will be made together with the club the moment it has to be made,’ Guardiola said.

‘Will I stay in another place for seven years? No, I don’t think so. It is difficult to find what I have here as a manager.

‘It is seven seasons here and there are good moments and bad moments we have had together. I cannot forget (dramatic defeats by) Real Madrid and Tottenham in the Champions League.

‘This is part of our lives. We lived very good things but whatever happens it is part of the incredible moments of my life that I’ve seen here.

‘It’s not about achievements after six or seven years, it’s seeing if you are comfortable being here. I have the feeling that both the club and myself are happy to be together.’