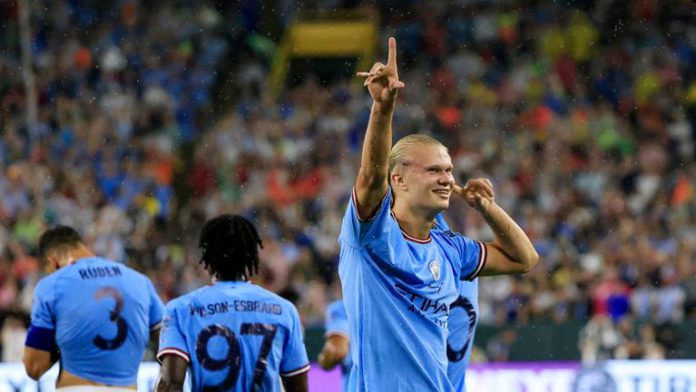 Haaland has been argubaly the most in-form player in world football since he arrived at the Etihad, notching a remarkable 17 Premier League goals in 11 games. His tally across all competitions now sits at 22 in a City shirt and both his teammates and fans couldn’t be happier with the start he’s made.

However, with that in mind – Haaland wasn’t the only striker City brought into the club over the course of the summer. Former River Plate sensation Alvarez also joined the side for £20million and has been forced to operate in the shadow of the Norwegian superstar.

The young Argentine finally had ‘his’ moment during the 3-1 Champions League win over Sevilla, which saw Alvarez inspire his side to come from behind to take all three points. Having set up the first goal, he notched the second himself and came in for some well-earned praise after the clash.

Hargreaves, while on punditry duty for BT Sport, complimented the forward for the way he has settled in and adjusted to life in England since the switch.

“It’s like when you go from your club, to your national team, to England, it’s just a different level,” the former England international explained. “I think, obviously, he’s been fabulous in Argentina.

“He [Alvarez] is a steal for what they paid for him. He’s worth at least double or treble that. And if it wasn’t for Haaland he’d be starting a lot more. They’ve got a special one there.”

Ex-City star Joleon Lescott conceded that while Haaland’s on pitch achievements dwarf those of Alvarez’s, the way the Argentine has conducted himself off the pitch is something to be proud of.

“I think if you take his performances and contributions in isolation he’s done really well, but when you put them next to Haaland who’s a similar age, obviously similar position, it doesn’t match up.

“But for what he’s done coming form a new continent, language and culture and change I know having spoken to Sergio [Aguero] on his arrival, he likened Alvarez to Carlos Tevez, and that’s a big compliment.

“But you can see it in his game, elements of both, you can see his work rate for the team off the ball but he’s a natural finisher. I also think he’s able to compose himself in the box which is not something you can teach.”

Wetang’ula, Mudavadi in Bungoma to drum up support for Ford-Kenya Senate...