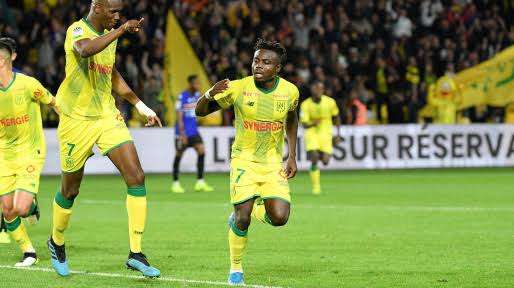 Nigeria’s Super Eagles winger Moses Simon continued to underline his importance to his French Ligue one side FC Nantes after he bagged his second goal of the season.

Nantes on Sunday hosted Toulouse in a Ligue One match and it was the Super Eagles star that stole the show with his amazing wing play to peg back the away side.

Toulouse Aboukhlal silenced the home crowd with a cool finish in the 14th minute before Guessand equalised early second half.

Simon, then produced an amazing footwork finish in the 54th minute to provide the assist to Mostafa, who put the home team ahead.

Simon was responsible for the third goal six minutes later as FC Nantes secured a 3-1 win over Toulouse.