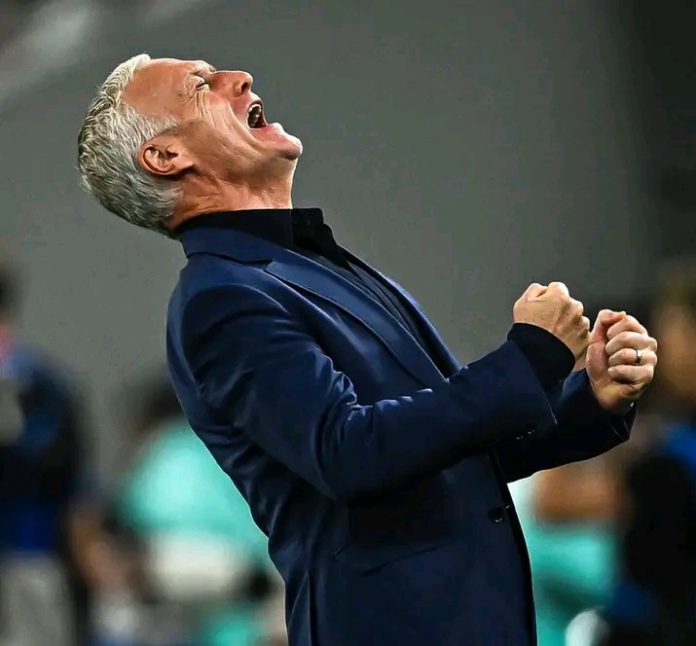 France manager Didier Deschamps has admitted that he felt his side were ‘lucky’ in their World Cup quarter-final victory over England.

Goals from Aurelien Tchouameni and Olivier Giroud sealed the victory for the reigning holders, in a match where there was little to separate the two teams.

England though were perhaps the better team on the day, having double the amount of chances as France while also having more possession.

Harry Kane also skied a penalty which could have taken the game to extra-time.

After the match, Didier Deschamps, who is looking for his third World Cup success as part of the French set-up as either a player or manager, said: ‘It was a big game, we played a superb England team who are strong technically and physically.

‘It’s brilliant for the players to be in the last four again. We got a bit lucky although we gave away two penalties but we kept our lead with our hearts and our guts.’

It was a frustrating game for the Three Lions who felt as though more decisions should have gone their way.

Kane could have got a penalty in the first-half after a challenge by Dayot Upamecano, while Bukayo Saka was also bundled over by the French defender in the build-up to Tchouameni’s opener.

The Tottenham star scored his first penalty after a foul by Tchouameni on Saka, before Giroud headed home to put Les Bleus in front.

Deschamps was unconcerned that his team got through despite England marginally having the better of the play.

He said: ‘I’ve watched all the quarter-finals – no team that has qualified for the semi-finals was in control of their match for all, or maybe even the majority of the time.

‘I would’ve preferred if we hadn’t given England some gifts, but they were at a really high level.’

Deschamps won his first World Cup with France as a player back in 1998, before he lifted the trophy as a manager back in 2018.

‘How Delta State Will Host The Best Games In History’ –...