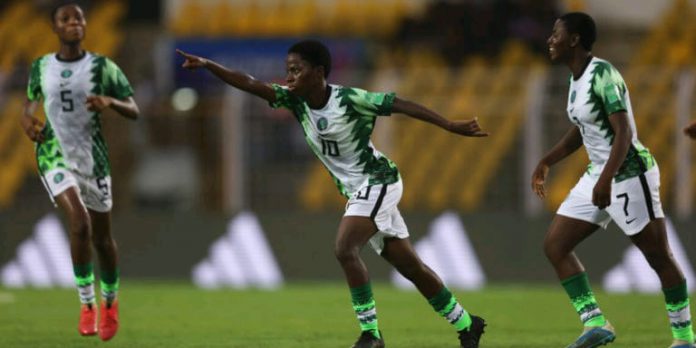 Nigeria bounced back into contention at the FIFA U17 Women’s World Cup yesterday after a 4-0 trouncing of New Zealand. The score line would have been much higher had the girls from Nigeria converted more of their scoring opportunities.

The Flamingos, who lost narrowly 2-1 to Germany on Tuesday, started spritely and had come close a number of times before Aminat Omowunmi Bello headed into the net after a sweet pull-out by left-back Tumininu Adeshina.

Right-back Miracle Usani, whose marvellous free-kick put Germany on the back-foot on Tuesday, scored her second of the tournament and Nigeria’s second in the 34th minute to make it 2-0 in favour of Africa’s best team.

Ajakaye, the team’s top scorer in the African qualifying campaign, headed powerfully from Adeshina’s corner on the hour mark, but the New Zealand goalkeeper punched the ball away.

Substitute Edidiong Etim and Ajakaye missed opportunities within a minute, but in the 75th minute, midfielder Taiwo Afolabi scored Nigeria’s third by swinging the ball into the top right corner from 20 yards.

Substitute Etim would have had the last say with five of six additional minutes played, when she capitalized on a defensive blunder to lift the ball past the opposing keeper.

Victory gave Nigeria three precious points, and stand them in good stead for qualification if they defeat Chile on Monday afternoon at the Kalinga Stadium in Bhubaneswar.