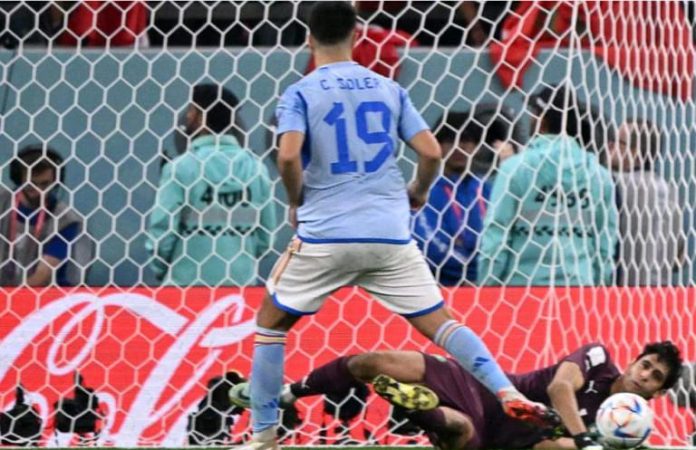 With Morocco conceding just once from an own goal at this World Cup, no opponent has scored against their goalkeeper yet. Incredibly, these include penalties in their round of 16 shootout win over Spain. Who is Yassine Bounou, the man with the safest pair of hands at Qatar 2022?.

He has come a long way

Literally, he has, for he was born in Montreal, Canada to Moroccan parents.

He then moved 5,795km to Morocco at an early age, joining local club Wydad Casablanca from age eight and playing nine league games for them across two seasons before heading to Atletico Madrid in Spain on a pay cut.

With Thibaut Courtois, Sergio Asenjo and Joel Robles all on Atletico’s roster, Bounou played for the B team in the second division and never featured for them in La Liga.

Impressing for Zaragoza in the second-tier while on loan, he signed for Girona in 2016 and helped them win promotion. Two strong spells in the top tier earned him a loan deal with Sevilla in 2019 before the move was made permanent a year later after he helped the club win the Europa League.

From then on, he has been Sevilla’s first-choice custodian, winning the Zamora trophy for clocking the lowest goals-to-game ratio for the 2021/22 season in which he conceded only 24 goals in 31 games. He is the first player from Sevilla and Africa to win the prestigious award.

2. He has a good track record of saving penalties
On Tuesday, Bounou kept out Carlos Soler and Sergio Busquets from the spot, while Pablo Sarabia struck the post (Bounou went the right way), and people shouldn’t be surprised even if he is the first African goalkeeper to save two penalties in a World Cup shootout.

After all, the 31-year-old has faced 50 penalties in his career and saved 13 of them

Morocco midfielder Azzedine Ounahi told ESPN: “We trust him. We know he is an excellent keeper. We knew that if we got to the penalties, he would do the job for us. And he did. Spain didn’t even score a single penalty.”

However, Bounou was modest when he told ESPN: “It was incredible. It is a historical moment. I hadn’t even prepared for the shootout that much. There was so much pressure in the game so I just tried to enjoy it.

“For the penalties, it is about instinct, a bit of luck and that’s it, there is not much else.”

3. He also has a sterling clean sheet record
According to football website Transfermarkt, Bounou has 109 shutouts from 334 games at club level.

For Morocco, he has an even better record, with 31 clean sheets from 49 matches. This translates to an average one every 2.7 games. Some top strikers don’t even score this frequently.

4. He is dangerous at the other end too
Nicknamed Bono, he is a rock star on both ends of the pitch. In March 2021, with Sevilla down 1-0 at Real Valladolid, he went to attack a corner kick, and scored his first and only professional goal.

5. Haaland feud
While he is known to be generally calm and soft-spoken, Bounou couldn’t help but be pumped up in a Champions League match against Borussia Dortmund and their striker Erling Haaland in 2021.

During their match, Bounou tipped Haaland’s penalty on to the post, denied the Norwegian on the rebound and celebrated in his face, only for the Video Assistant Referee to order a retake as the goalkeeper had stepped off his line before the spot-kick was taken.

Haaland made no mistake with his second chance and returned the favour by goading Bounou after scoring.

Now with Manchester City, Haaland said: “I missed and then he cheated. Then I took it again and scored when he didn’t cheat.

“When he was screaming in my face after the first one, I was thinking ‘it will be even better to score another goal’ – and that’s what happened, so it was nice… Maybe it’s karma in this world.”

After Luke Shaw reveals Stuart Attwell ‘told Maguire it was a...