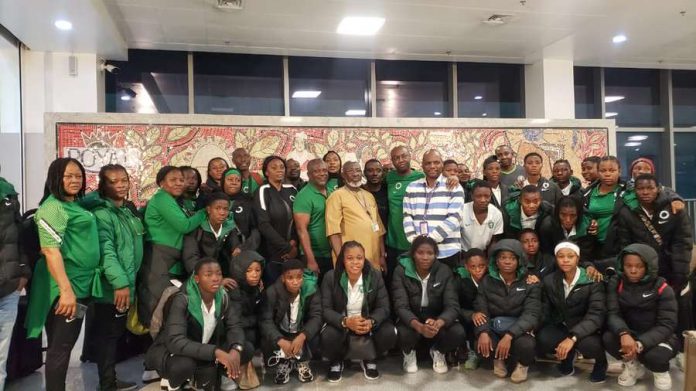 After facing several issues about the travelling plans to Nigeria, Falconets has finally returned to the country. The team represented Nigeria in the 2022 FIFA U20 World Cup in Costa Rica and crashed out in the quarter-final after they lost 0-2 to the Netherlands.

On their way to Nigeria, the team has to sleep over at the Turkey airport due to a mix-up in their travelling arrangement.

The team finally arrived in Nigeria late on Wednesday evening and they are received by the Secretary General of the Nigeria Football Federation, Mohammed Sanusi and Toyin Ibitoye who represented the Minister of Youth and Sports.

In his address, Sanusi apologised to the entire team and promised that their bonuses and allowances will also be paid.

“It’s an approval from the ministry of sports and we want to assure you that the same Super Falcons will be paid their bonuses, you will also be paid.

We want you to know that Nigerians appreciate all of you but we are saddened that you have to sleep over at the airport because for a reason that is beyond our control,” he said.

Meanwhile, the Minister of youth and sports in absentia presented a cash reward to the team.

The cash was presented by Toyin Ibitoye who represented the minister and further promised that all their entitlements will get to them.

Qatar 2022: Liberia Camp In Disarray As Head Coach Refuse To...