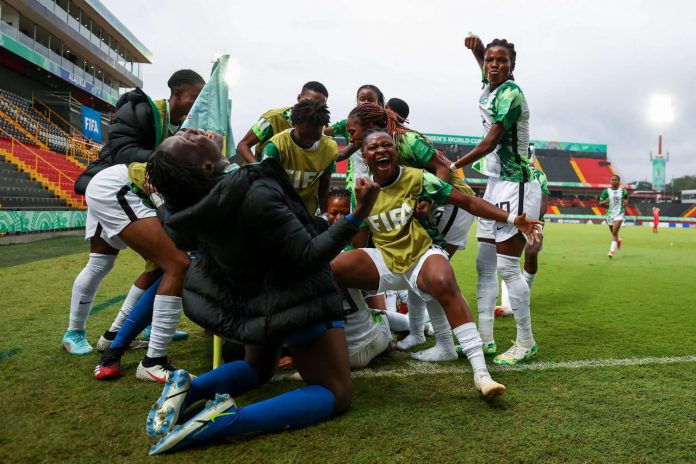 • Set to Face Netherlands In The Quarter

Nigeria U20 Women’s team Falconets continued their impressive performance in the ongoing FIFA U20 World Cup in Costa Rica as they earned another win against Canada, BSNsports.com.ng report
The team has secured a back-to-back win in their first two matches against France and Korea to sit on top of the group.

They earned their victory against Canada a hard way as they have to come back from a goal down to secure a 3-1 win.

It was the North American country that broke the deadlock in the 4th minute after a goalkeeper error from Nigeria’s Oyono.

It was a 2-1 to Nigeria in the 32nd minute via a penalty which was converted again by Onyenezide.

Chioma Olise sealed the game for Nigeria in the 91st minute through a well-taken goal and ensured that Nigeria has a maximum of 9 points to top the group.

Meanwhile, Falconets will have their hands full in the quarter-final as they will confront the high-scoring Netherlands.
The Dutch girls wallopped Ghana in their final group match 4-1 to finish in the second spot of Group D.

Success of ANC-EFF coalition depends on balance of forces