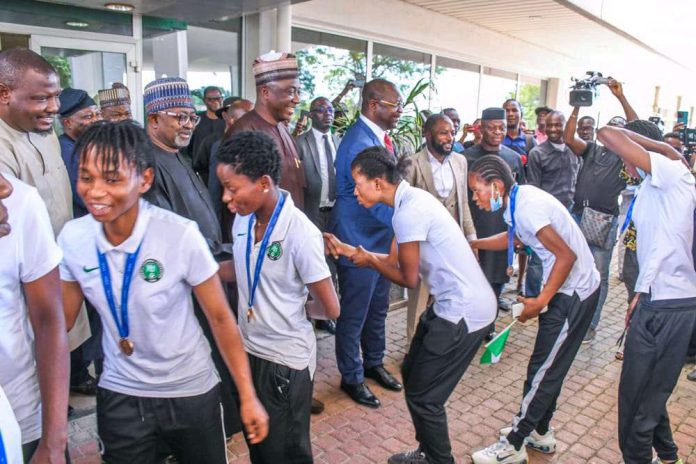 Minister of Sports, Sunday Dare, and popular singer, Kizz Daniel have reacted to the the viral video of the moment captured when U17 players of Germany national team joined the Nigeria Flamingos to do the cough dance challenge after their Third place match in India.

Flamingos had scored three goals in the match until 72nd minute when Germany scored first goal and surprisingly scored back the two goal deficit to end the match 3-3.

Both teams went into penalty shootouts before the Bankole Olowookere led team emerge victorious with a 3-2 win over the Germans.

However, after the match, the young ladies defied the lines of ethnic, race and cultural differences to dance to the most popular song in Nigeria right now, titled, Cough. Most surprising in the video was seeing the Germany young girls who had lost to Nigeria dancing doing the ‘Odo’ dance challenge with the eventual winners.

The owner of the cough song, Nigerian singer, Kizz Daniel reacted to the viral video while he congratulated the Flamingos for their victory over the German ladies. “Congrats to the team once again against the German. I LOVE THE UNITY #cough. Kizz Daniel wrote on Instagram.

Minister of Sports at the reception of the Flamingos at the Moshood Abiola Stadium in Abuja on Tuesday called out Tumininu Adesina, the Nigeria U17 defender who in the viral video taught the Germans the dancing step. Tumininu and two other players were called out dancing to Kizz Daniel ‘Cough’ song on request of the Minister.

Commenting, Dare said, “at the Commonwealth Games, we saw how Tobiloba Amusan danced to Kizz Daniel song ‘Buga’ when she won gold medal in 100m hurdle at the World stage. Now we have another girl, Tumininu doing same in India after beating Germany to the bronze medal.”

‘Ramaphosa can’t be told by criminals to leave’ – ANC criticises...