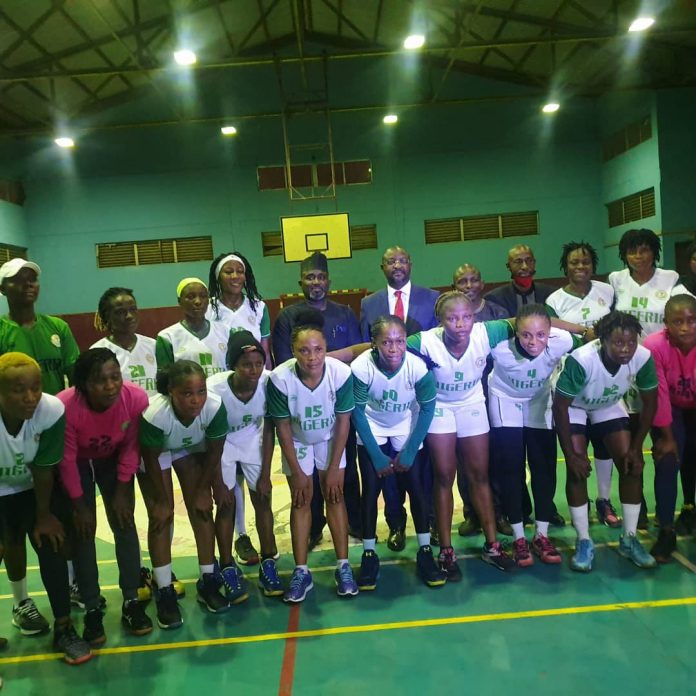 The quick intervention of the Minister of Youth and sports Development Mr Sunday Dare has rescued the female National Handball team from missing out of participating at the Nations Cup in Cameroon after delayed funding threatened the build-up.

Dare had on May 5 visited the team at their Abuja camp in company of the head of the HFN Caretaker Committee, Sam Ocheho, where he charged them to ensure they pick one of the World Cup slots allocated to Africa with an assurance to make funds available.

While the money was eventually approved by the Minister, the long process of getting it released created doubt and panic, until the Minister directed that the money should be sourced and released.

As the team intensify training, they have played three friendly games.
In the first, they defeated FCT Under-18 Boys 36-26 on Wed. May 26. Two days later, they narrowly defeated the Niger State Under-21 Men’s team, lost to Suleja Shooters 31-29 on Saturday, at the Indoor Sports Hall of the MKO Abiola National Stadium, Abuja.
The Women Afcon bound team will play their last tune-up match on Tuesday.
The national team has been in camp since May 2 under the supervision of Coach Rafiu Salami.

The team which commenced camping with 24 players, including 3 Benin Republic based professionals were on Tuesday trimmed to 18 players.
Coach Salami however confirmed that two more players will be dropped before the team’s departure to Yaounde on Friday, June 4.

The team which is camped at the Aguyi Ironsi Cantonement, Abuja is making her first appearance at the Nations Cup after 26 years.

Nigeria is drawn in tough Group B, alongside DR Congo who Nigeria will play on June 8, tournament host Cameroun, and Kenya.

The team’s main target is to pick one of the four African tickets to the World Cup.

The 2021 Africa Women’s Handball Nation’s Cup is slated to hold from June 6 – 18, and will feature 12 countries, grouped into three pools.