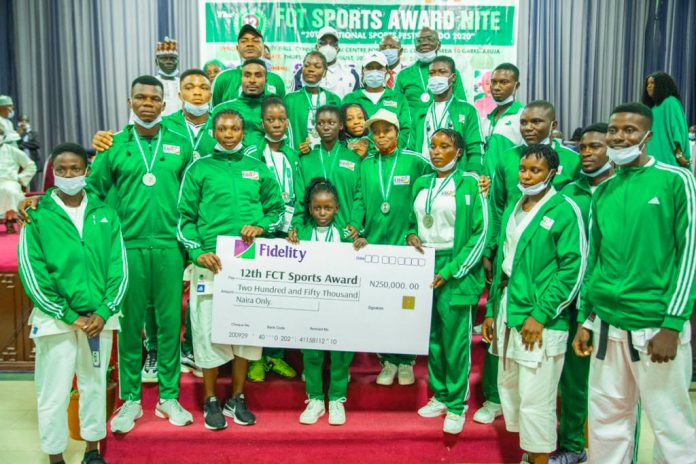 In recognition of the outstanding performance of athletes that won laurels for the Federal Capital Territory Administration at the Edo 2020 Festival, the FCT rolled out the drums to celebrate them on Thursday in Abuja.

Speaking at the Ceremony, the Minister of Youth and Sports Development Mr. Sunday Dare who was the guest of honour discribed the athletes as the future stars of Nigerian Sports.” I must commend the Edo State Governor Mr Godwin Obaseki and his Deputy Comrade Philip Shaibu for their love for sports which ensured the success of the Festival. They invested alot of resources and logistics for the successful hosting of the Festival.

The Festival almost didn’t take place due to the outbreak of covid-19.

I was initially sad that the event was postponed severally, but I was Happy that many lives were also saved. I commend the commitment of the FG, the PTF, NCDC, Ministry of Health and Edo State for the hosting of the Festival I also thank the State Governors for releasing their athletes to take part and for providing the resources”.

He further said “I thank the FCT Administration for investing in the lives of the athletes that made the FCT proud in Edo. There are alot of talented Youths in the FCT so we want to see more athletes representing the FCT at the next Festival in Delta.

Various cash sums were given to the medalists and their coaches during the ceremony.