Everton’s social media team are continuing to have fun at the expense of Liverpool’s supporters, on the back of Saturday’s Merseyside derby.

Rivalries were of course renewed at Anfield 24 hours ago, when Liverpool and Everton faced off in a Premier League showdown.

The clash marked a key one in the English top-flight’s race for European football, with Jurgen Klopp’s hosts, ahead of kick-off, having sat just 3 points clear of their ‘noisy neighbours’, in 6th.

In turn, Everton were aware that a victory at the home of the champions would guide them not only level with Liverpool, but also back into the thick of the top-4 race.

And, when all was said and done yesterday evening, secure all 3 points is precisely what the Toffees went on to do.

The game’s scoring was opened inside three minutes, when James Rodriguez’s pinpoint through ball was lashed home by Richarlison:

A superb finish from Richarlison gives Everton the lead at Anfield!

Then, seven minutes from time, a crucial 2nd was forthcoming.

After Trent Alexander-Arnold was adjudged to have felled Dominic Calvert-Lewin in the hosts’ box, Gylfi Sigurdsson stepped up to slot home the ensuing spot-kick, securing a first league win at Anfield in over 20 years in the process.

24 – Everton picked up their first win over Liverpool in 24 meetings in all competitions (D12 L11) – ending what was Liverpool’s longest ever unbeaten run against a single opponent. Finally. pic.twitter.com/fpEqMwX5Ki

On a momentous evening for all associated with Everton, however, unfortunately, the post-match chatter widely honed in on the late penalty awarded to Ancelotti’s men.

This came amid widespread debate regarding whether or not Alexander-Arnold’s lack of intent in taking down Calvert-Lewin should have seen the decision overturned.

Chris Kavanagh took all of about 5 seconds in checking the incident on the pitch-side monitor, another aspect of the eventual call to have thoroughly angered the Liverpool faithful:

One group who have since refused to allow their spirits to be dampened by such chatter, however, have been the Everton faithful.

The celebrations on the back of their derby victory carried long into the night on Saturday, as Blues across the globe took full advantage of a rare opportunity to poke fun at their bitter rivals.

And, as outlined above, such efforts have since carried forth, a full 24 hours later.

Taking to Twitter this evening, Everton’s social media chiefs highlighted the calls for Saturday’s late spot-kick to be overturned, in ‘meme’ format, with a little help from star man Richarlison:

“sHoUlD nEvEr aV bEeN a PeN” pic.twitter.com/tWzpseyOYh

Everton recorded a long overdue win at Anfield in the 238th Merseyside derby, with… 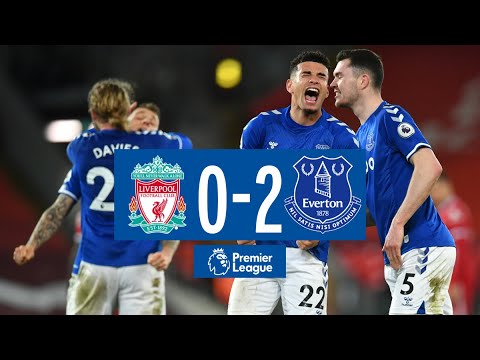 Everton recorded a long overdue win at Anfield in the 238th Merseyside derby, with…