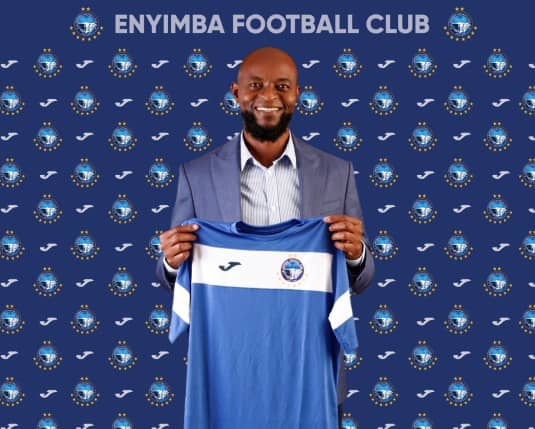 Former Super Eagles winger, Finidi George has been announced as head Coach by 8 times NPFL champions, Enyimba of Aba after both parties signed a two-year contract ahead of new NPFL season.

Finidi succeeds Fatai Osho who departed the club at the end of 2020/2021 NPFL season where the former Remo Stars coach guided Enyimba to 3rd on the league table and delivered one of the CAF Confederation Cup tickets.

The former Real Betis winger who is a legend in Nigeria football had 62 Caps for the Super Eagles in an illustrious playing career that lasted up to fifteen years.

He was part of the Nigeria Golden generation that won the 1994 Africa Cup of Nations in Tunisia and went on to do Nigeria proud in the 1994 and 1998 FIFA World Cups.

The River State born winger joined Ajax of Netherlands from Sharks FC of Port-Hacourt where he became a leading figure in a team which that won eight major titles, including the 1995 Champions League. He also played several years in Spain with Real Betis, and had a brief spell in England before retiring.

Finidi ventured into coaching after he retired from active football and bagged his UEFA coaching licence from Spanish FA.

The young coach is expected to be in the dugout of Enyimba as head coach when they face Diambers FC of Senegal in the CAF Confederation Cup second preliminary round fixture in October.