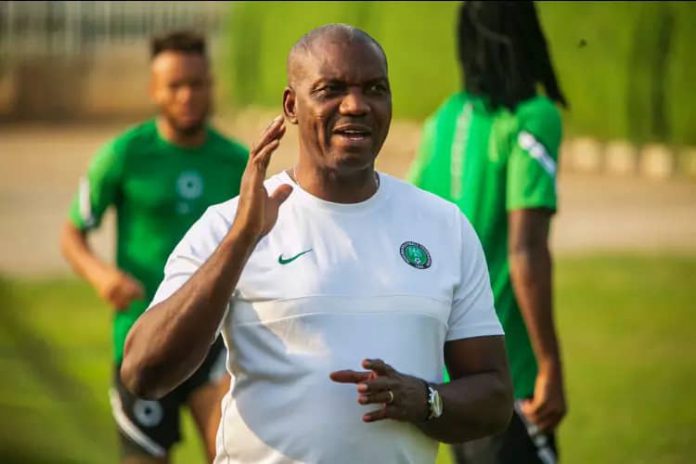 Ex-Super Eagles stopper, Peter Rufai, has backed Austin Eguavoen to employed as the substantive coach of the senior national team.

Rufia made this assertion during a phone in interview with Sports Radio, Brila FM on Monday.

According to him, Eguavoen has shown he has what it takes to guide the team aright and lead us to glory so he should be considered to keep the job as the coach.

“Everybody have seen the team play and we are all happy by their brilliant display in the first two games. So why utter the team spirit by bringing a white man to coach the team. Let Eguavoen continue the good job he has started,” the USA ’94 star player opined.

Speaking further, Rufai pleaded with Nigerians and the Nigeria Football Federation to continue supporting Eguavoen and the team in their quest to win the Africa Cup of Nations for the fourth time since its inception.

“With our present squad, I believe anything is possible. We can also lift the trophy’’.
Rufai rooting for Eguavoen is against the backdrop of Jose Peseiro’s appointment as the national team’s new manager.

Peseiro, 61, had previously worked at Panathinaikos, Real Madrid, Sporting CP, Al Ahly,  Braga and most recently as Venezuela national team coach – a role he left in August over unpaid salary.