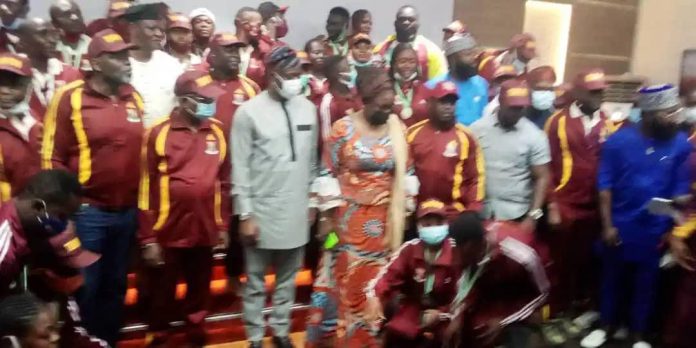 Also, each of the state’s 55 coaches to the festival is to receive N500,000, irrespective of whether their trainee won medal or not.

Governor Seyi Makinde made this announcement when he received the state’s contingent to the festival at governor’s office, Ibadan, on Wednesday. The state emerged sixth at the end of the festival, winning 31 gold medals, 30 silver medals and 42 bronze medals.

The state presented 230 athletes, 55 coaches, and 44 support officials and personnel, making up a 329-contigent from Oyo State for the sports festival. The state, however, participated in 22 events at the festival, both in male and female categories.
Makinde, assured the money would be released to the benefiting athletes and coaches within two weeks.

He also announced additional rewards of N1million each for two gold medalists in shot put and discuss and a paralympics event to encourage participation in the two sports areas.

Speaking generally, Makinde assured of giving the needed support to ensure that the state produces winners of world medals in the nearest future.

In his remarks, state Commissioner for Youth and Sports, Seun Fakorede, described the feat achieved at Edo 2020 as epochal in history of the state.

Speaking on behalf of the athletes, a gold medalist in tennis, Babalola Mumini, appreciated Makinde for his support for sports development in the state.

He urged the state government to commits more resources to adequate training and retraining for their coaches, and the provision of necessary logistics for athletes.
Babalola also urged the state government to put necessary measures in place to ensure that the state’s medalists are not poached by other states ahead the next National Sports Festival scheduled to hold in Delta State.

Man United fans are getting excited about a Sancho/Varane double deal...