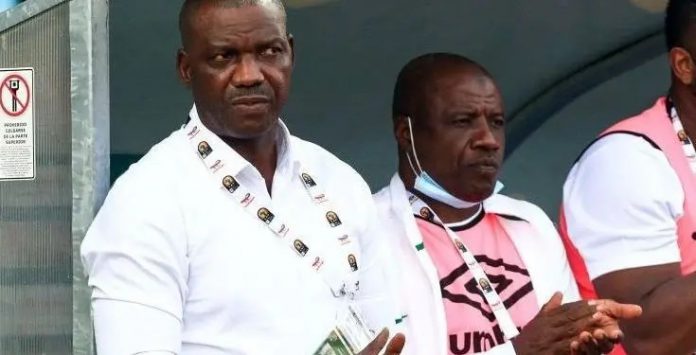 The starting line up in the ill-fated World Cup playoff second leg match between the Super Eagles and Ghana’s Black Stars might not have been the idea of Coach Austin Eguavoen, SportingSun’s investigation reveals.

It was gathered that the interim Technical Adviser had wanted to stick with same line up in Kumasi, with one or two changes but eventually, he was “forced” to start five fresh players, who though were introduced in the first leg.

A source close to the technical crew of the Super Eagles has revealed that some ‘Nigerians’ forced the starting lineup of the team on the crew against the Black Stars of Ghana.

Eagles were lacklustre all evening as they could only force the Black Stars to a 1-1 draw at the Moshood Abiola Stadium, Abuja on Tuesday which was not enough to secure for them a World Cup ticket.

Eguavoen has been roundly criticised for the starting lineup that saw about five changes to the squad that played a goalless draw with Ghana in the first leg in Kumasi last Friday.

Defender Calvin Bassey, midfielders Frank Onyenka and Oghene Etebo as well as strikers, Emmanuel Dennis and Lookman Ademola started against Ghana.
However, a backroom staff of the team said even though it was the coach who deserves to get the blame because the buck stops at his table, Eguavoen would be pardoned if Nigerians know what he faced behind the scene.

The official claimed some players were forced on him as starters that considerably altered his tactical plans for the tie.

“We can’t reveal some of the things that happened behind the scene regarding the team. The lineup people we saw against Ghana was what Nigerians wanted. For instance, the coach wouldn’t have started Dennis and Lookman but ‘some forces’ wanted them. He would not have considered Bassey for the left back they wanted him there.

“There is a meeting he had with some officials prior to the game where he was handed over the list of players that must play. The pressure that we faced in the technical crew before the game was intense and it is hard to entirely blame the coach for what happened.”

SA diplomacy head: ‘We will not tolerate insults from Eswatini govt’

Exposure programme for Eagles B will continue apace – Pinnick