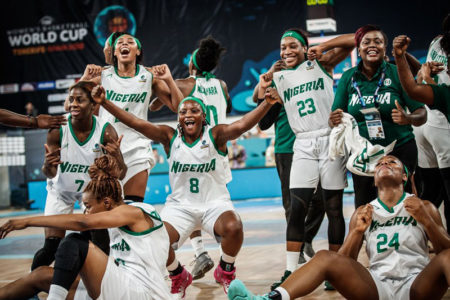 Players of Nigeria’s women’s basketball team, D’Tigress, have threatened to boycott the 2022 FIBA World Cup qualifying tournament over the refusal of the Nigeria Basketball Federation (NBBF) and the Ministry of Youth and Sports Development to meet their demands.

D’Tigress aired their grievances  via a social media platform  yesterday said they were asking for  their outstanding  allowances.
Speaking through captain Adaora Elonu the Tigress said they want better preparation for major competitions.

“We demand the payment of the money owed the players, officials and other volunteers. We want adequate travel plans to competitions and a Team Manager for all team’s functions,” Elonu said. “If these demands are not met, with all due respect to the Presidency, NBBF and the Ministry of Sports, all D’Tigress players will not be reporting to the FIBA World Cup qualifiers in 2022 in February. We are one united voice.”
Atonye Nyingifa, explained that what has hindered D’Tigress’ chances of performing at international competitions especially at the last Olympics in Tokyo where the team lost all their three group matches despite showing the potentials before the Olympics that they could compete with the best.

Ify Ibekwe who shone brilliantly at the Olympics and also at the recently held FIBA Afrobasket Championship in Cameroon where D’Tigress were victorious opened up on the debt the players, officials and volunteers are owed.
“We are  being owed USD 73,180 by the NBBF, USD 24,000 by the Ministry of Sports for the 2020 Tokyo Olympics grant and USD100,000 from donations from three banks in Nigeria,” Ibekwe stated.

On her part, Ezinne Kalu felt D’Tigress have been marginalised and that all their demands have been left unattended to ever since their former Team Manager resigned under cloudy circumstances.
“Musa Kida was not in Cameroon but somehow he showed up in Abuja to take pictures and to raise the trophy again for political gain,” she lamented.

Ola Aina: I’ll do my Best Against Liberia