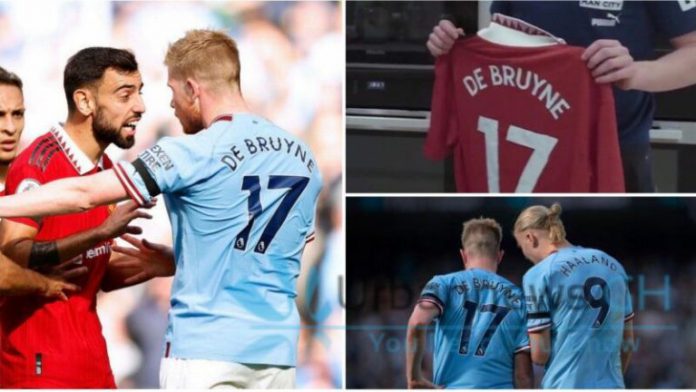 Kevin De Bruyne proved he’s a true blue by threatening to burn a Manchester United shirt in a hilarious clip.

The Manchester City star has already been the reason for more than a few Old Trafford nightmares – and has now gone out of his way to deny a United dream.

Fresh off the back of humiliating their neighbours last weekend, De Bruyne showed there was no sympathy for those on the red half of the city.

Whilst making an appearance on Belgian podcast Mid Mid, the City ace was offered a United jersey with his name and number on the back.

The host can be heard saying “it’s a dream”, but that was quickly dashed when after pulling a face, De Bruyne said: “Can I burn it now?” and “most dreams aren’t real”.

However, while he was quick to dispose of that shirt, he has recently inherited a shirt from City’s rivals after successfully grabbing Cristiano Ronaldo ’s last week. Ronaldo was an unused substitute as De Brutyne and his team-mates ran riot, winning 6-3 at The Etihad Stadium.
But while Erik ten Hag didn’t deem it necessary to include the 37-year-old, his opponents still clearly rated him with the Mail reporting De Bruyne made a beeline towards him after the full-time whistle.

The Belgian was reportedly spotted holding the iconic No.7 jersey, beaming with joy at his latest piece of memorabilia. While he was pleased to get Ronaldo’s shirt, the smile was more likely down to the resounding nature of their win over the Red Devils.

A hat-trick apiece from Phil Foden and Erling Haaland earned them the bragging rights and De Bruyne suggested that scoreline didn’t truly represent the gap between the two sides.

“We set up quite good,” said De Bruyne. “We found the spaces in the first half and played a really good game. I feel like whenever we’ve played away at United we have played really well, and when we’ve been at home they’ve won more than we did. They had found a way to win some games.

“But here we played better. Unfortunately at the end they scored two goals because I think 6-1 was fully deserved.”
Haaland understandably earned most of the headlines after scoring a Premier League hat-trick for the third time in a row at The Etihad.

But the Norwegian was quick to praise De Bruyne, after laying on two goals to take his tally of assists for the season to 10 in 11 games.