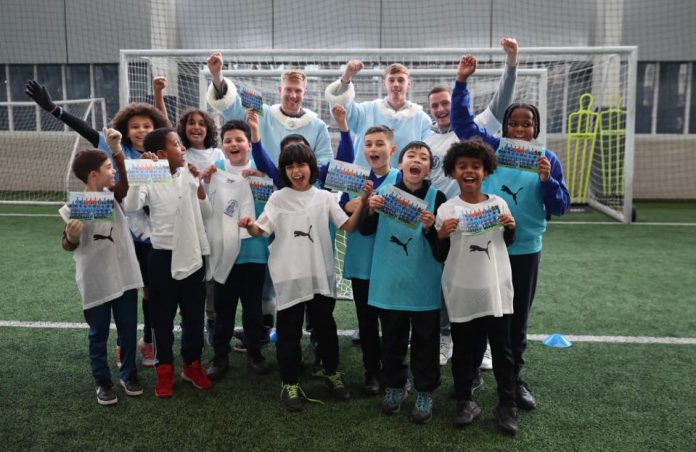 Manchester City star, Kevin De Bruyne has paid a surprise visit to a City in the Community session to raise spirits in the run-up to Christmas.

De Bruyne has only recently returned from the World Cup, where he endured the disappointment of Belgium crashing out in the group stage. But his attention is now fully focused on club matters, including helping with the charity work City do.

As part of that work, City has launched their ‘A Time for Giving’ campaign, raising more than £190,000 to help support the health of young people in Manchester. They have also donated more than 400 gift bags to children who will sadly be staying in hospital over Christmas.

For the first time since the pandemic began, players from City’s senior team were able to hand out some of those gifts in person to patients at the Royal Manchester Children’s Hospital.

Erling Haaland, Riyad Mahrez, Rico Lewis and Stefan Ortega all spent time talking to the children, as well as meeting doctors and nurses. De Bruyne meanwhile paid a surprise visit to a City in the Community session, to the delight of the children taking part.

“It’s obvious from my visit today how much these children enjoy playing football with City in the Community coaches. Their enthusiasm is infectious,” the Belgian captain said of his visit.

“The impact of playing football on physical and mental wellbeing should not be underestimated, and it makes me proud to know that Manchester City and its fans are creating real opportunities for young people through the Club’s campaign this Christmas.”

City’s charity arm has also laid on a calendar of events at their Etihad campus and donated to local foodbanks and organisations. Trustee and former City star Nedum Onuoha hailed the success of the campaigns and praised the players for lending their time.

“The success of the ‘A Time for Giving’ campaign so far has been amazing. It encapsulates the community values of Manchester City and builds on the donation of Christmas gifts and footballs to every child in East Manchester over the past two years,” he said.

“Having grown up in the local area experiencing City in the Community’s football programmes first hand, I know just how impactful these funds will be. Free football sessions for children in Manchester won’t just increase their levels of physical activity, but boost confidence, self-esteem, and mental wellbeing.

“At the same time, I’m also incredibly proud that the Club continues its fantastic support for the Royal Manchester Children’s Hospital, as well as donating items to foodbanks and hosting events at the Club for those in need this time of year.”

City has so far been able to fund 76,000 hours of free football community sessions through the A Time for Giving campaign. It will be open to donations until New Years’ Eve, with the total raised so far set to increase.

Pele ‘to spend Christmas in hospital’ after medical reports show his...