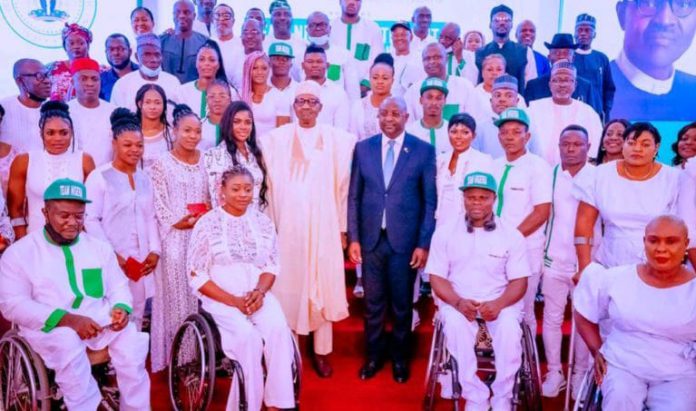 The Minister of Sports and Youth Development, Sunday Dare has outlined the President Muhammadu Buhari Administration’s scorecard under the Sports and Youth Sector since its inception in 2015.

Presenting the achievements yesterday during the International Press Briefing held at the National Press Centre, Abuja, Dare stated that his Ministry has the mandate to promote the physical, mental and socio- economic development of the youth, constituting the largest demographic composition representing 65% of our population.

He stated that, under the present administration, the Sports and Youth sector has witnessed tremendous turn around through the implementation of well-thought out initiatives, programmes and policies targeted not only at empowering our youth but also moving sports away from mere recreation to business. This he said was with a view to contributing to the socio-economic development of the country.

While describing the youth as the strength and future of our nation, Dare observed that “fixing them is fixing the country” and that was why he added, that the present Administration embarked on empowering them through the acquisition of various skills to make them entrepreneurial, employable as well as employers of labour. Stating further that so far, a total of 432,812 youth have benefited from the various training programmes which include Cyber Security, Web Development, Artificial Intelligence, Robotics and Coding, among others

This, he noted, became realisable through its Digital Skills Acquisition, Entrepreneurship, Employability, Leadership and Mentorship (DEEL) programme in collaboration with other development partners.

The Minister explained that, in order to provide access to funds to empower the teeming Nigerian Youth, the President Muhammadu Buhari-led Administration committed N75 billion to National Youth Investment Fund (NYIF). Of this amount he said, 26,000 applicants have so far accessed N10bn out of the fund while the next trench of N10bn is slated for disbursement in January 2023.

He said that the present Administration also boosted the commitment of graduates during the National Youth Service Corps (NYSC), through the increment of their allowances from N19, 800 to N33, 000 from January 2020.

On the Sports Sector, Dare informed that, it has also witnessed a massive face-lift through its Initiatives/Projects such as Adopt-an-Athlete, Pitch, Sports, Talent Hunt Programme as well as Welfare Fund for Athletes which had led to various sponsorship opportunities for them, thus leading to the numerous medals being harvested in different competitions within and outside the country.

He noted that the Administration was able to revive the National Principals’ Cup, OSOM Games, National Youth Games as well as the National Sports Festival, which is a forum for the discovery of talents.

The Minister emphasised that the present Administration, in recognition of the sterling performance of our athletes at the Commonwealth Games hosted them to a Presidential Reception and gifted them a cash award of N200 million, including National Honours.