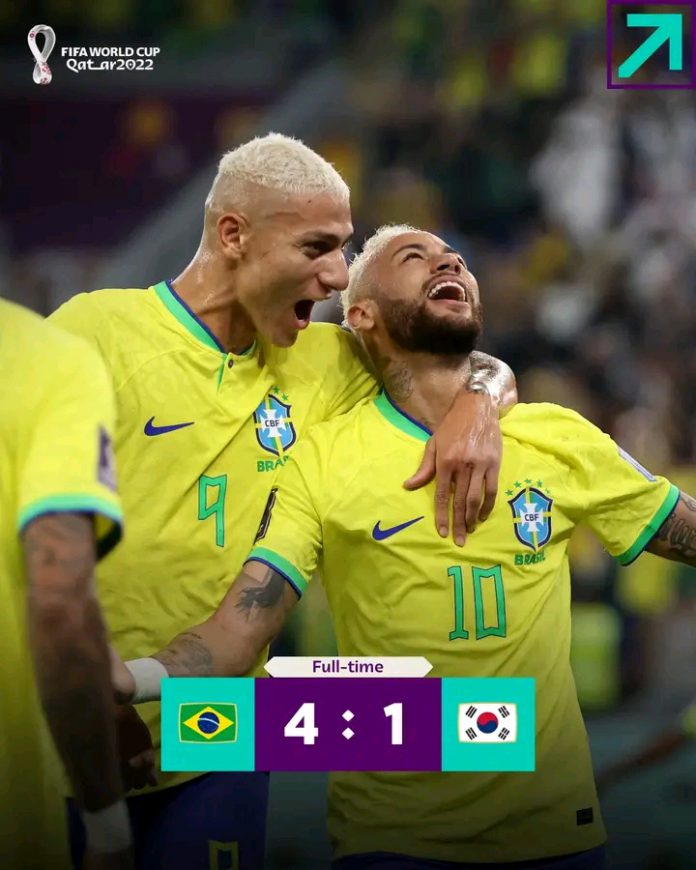 Brazil delivered an ominous message to their World Cup rivals with a dazzling display of attacking brilliance to dismantle South Korea and set up a quarter-final against Croatia.

Neymar made a goalscoring return to action after injury at Stadium 974, but Brazil’s superstar was only one element of a devastating performance that ripped South Korea to shreds and settled this last-16 game well before half-time.

Vinicius Junior set the tone with a composed penalty-area finish from Raphinha’s cross after seven minutes, and Neymar doubled Brazil’s advantage from the spot six minutes later for a foul on Richarlison.

It was Neymar’s 76th goal for Brazil, leaving him just one behind the legendary Pele’s all-time record.

Richarlison then added to his personal showreel of great goals at this World Cup when he followed his spectacular volley against Serbia with a real work of art, controlling the ball three times with his head and foot before moving into position to take Thiago Silva’s pass in his stride and score.

Brazil went four up with another gem after 36 minutes, Vinicius picking out Lucas Paqueta for West Ham’s expensive acquisition to score with a well-placed volley.

South Korea, to their great credit, continued to compete and forced several fine saves from Brazil keeper Alisson, before substitute Paik Seung-ho pulled one back with a glorious 30-yard strike to add to the night’s collection of special goals.

Akufo-Addo’s failure to reshuffle his ministers quite disappointing – Gyampo