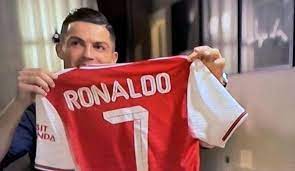 Cristiano Ronaldo has revealed that he wants Arsenal to win the Premier League this season – but only if Manchester United fail to join them in the title race.

The Portuguese player disclosed this in his tell-all interview with Piers Morgan.

In the second installment of the interview which aired on Thursday night November 17, Ronaldo praised United’s Premier League rivals Arsenal, expressing his admiration for manager Mikel Arteta and the ‘good team’ at his disposal while admitting he hopes to see them win the Premier League.

When asked by Gunners supporter Morgan if he would like to see them become champions, Ronaldo confessed: ‘I hope so.

‘Manchester first, and if not, Arsenal is some team that I like to see play.’

Arsenal sits five points clear at the top of the Premier League table during the World Cup break, having won 12 of their first 14 matches this season. They could challenge Manchester City for the title in 2022-23.

On their impressive form, Ronaldo added about the north London club: ‘I like the team. I like the coach. I think they have a good team.

‘And if Manchester United don’t win the Premier League, I will be happy if Arsenal do.’

Ministry Wades in to stem crisis