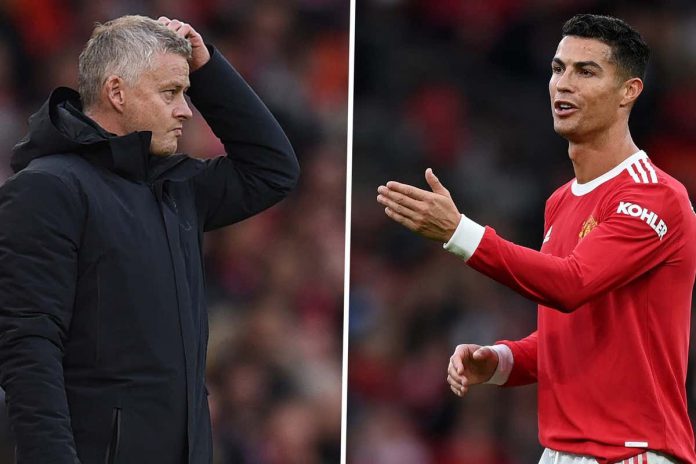 Many Man United players have lost faith in Ole Gunnar Solskjaer but Cristiano Ronaldo has implored them to show support.

Solskjaer safe, for now
For many, the 5-0 drubbing Manchester United suffered as the hands of Liverpool was the final straw and many likely expected Solskjaer to be sacked this week.

It was even reported that Manchester United were considering sacking the Norwegian and that they had made initial contact with Antonio Conte.

However, reports have since emerged that Solskjaer will be at least in charge of the club for one more game, vs Tottenham this weekend:

Ronaldo’s advice to Man United teammates
Despite Solskjaer staying put for now, it is clear Manchester United are in something of a crisis.

In the Premier League, they are already eight points off the top of the table even though only nine game weeks of the season have been played.

The Red Devils are out of the League Cup already, which is a big blow to their silverware hunt as it was, realistically, one of just two competitions they had any chance of winning this campaign.

Elsewhere, Man United suffered an embarrassing loss to Young Boys in the Champions League and only edged past Villareal and a weak Atalanta side thanks to late goals from Cristiano Ronaldo.

Now, as mentioned above, the Manchester Evening News have revealed what Ronaldo has been advising his teammates regarding Ole Gunnar Solskjaer following the club’s poor start to 2021/22.

It is claimed that CR7 is the figure holding the dressing room together and that he has encouraged his teammates to support Solskjaer:

Sources say Ronaldo is holding the dressing room together and he has encouraged teammates to support beleaguered manager Ole Gunnar Solskjaer.

The report adds that Ronaldo has advised the Man United players to not down tools, irrespective of what they thought of Solskjaer’s tactics.