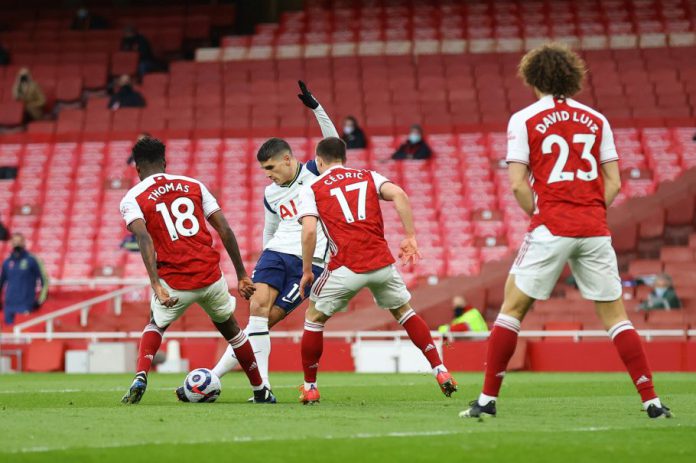 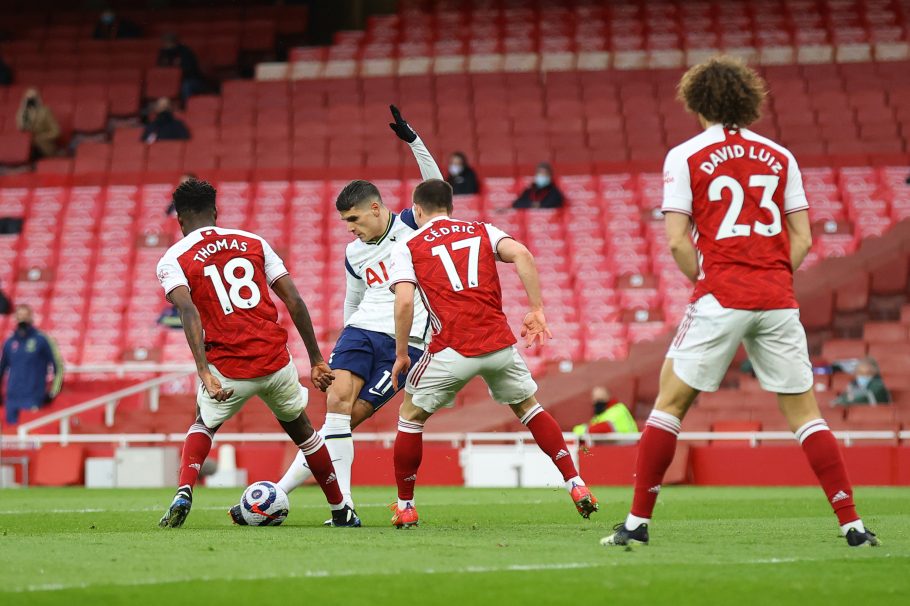 Social media has come alive this evening, amid widespread disbelief at the stunning goal netted by Erik Lamela in the North London Derby.

Arsenal and Spurs are currently locked in Premier League action at the Emirates.

The clash of course marks one which generally lives up to the pre-match hype, with goals rarely in short supply when rivalries are renewed in the north of the capital.

As such, the action-packed nature of the opening 45 minutes this evening has since come as little surprise.

At the interval, the scoreline is locked at a goal apiece, after Martin Odegaard cancelled out Erik Lamela’s effort just shy of half-time.

Arsenal, in truth, were fully deserving of an equaliser, if not more, with the hosts having also rattled the woodwork on a pair of occasions, thus far, through Emile Smith Rowe and Cedric Soares:

Arsenal hit the woodwork for the second time!

Despite the Gunners’ dominance, and some superb free-flowing football to boot, however, it is the solitary moment of quality to have been forthcoming at the other end which has since taken the headlines.

This comes after the aforementioned Lamela conjured up a genuine contender for Goal of the Season.

After seeing the ball drop kindly in his path on the left side of the Arsenal penalty area, the Argentine audaciously directed an effort into the far bottom corner of Bernd Leno’s net, courtesy of a Rabona:

In turn, it has since come as little surprise to see viewers flood to social media, to provide their astonished reactions to Lamela’s strike.

Some of the highlights are showcased below:

We’ve seen it before from Lamela 😍

Drop an emoji that shows how you reacted to Lamela’s stunner👇 pic.twitter.com/R1hWMv1jin

lol lamela would rather score a top 5 goal of the season than use his right foot. incompetence breeding brilliance you love to see it

Goal of the season contender #Lamela

I will give Lamela Goal Of The Season already. That’s insane goal sense.

Just rename the rabona ‘The Lamela flick’ from now on. #ARSTOT

A rabona nutmeg goal in a North London derby? Just fuck off and take the Puskas award. What a goal by Erik Lamela! I’ve roared the house down, the neighbours should arrive any moment to see if I’m alright. Wowzeroonie! #NLD #ARSTOT

Nobody:
Absolutely nobody:
Erik Lamela: pic.twitter.com/RRBA65zEfh