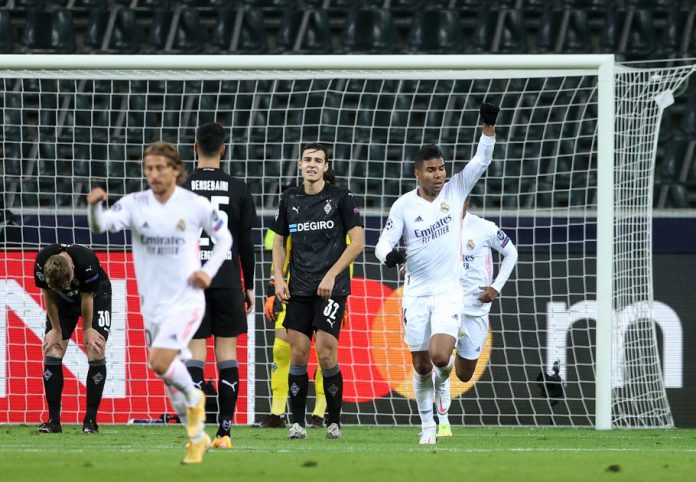 Real Madrid fought back from a goal down to secure a share of the spoils versus Atletico this evening, with Casemiro having again proven key when it mattered most.

The marquee fixture of the La Liga weekend played out at the Wanda Metropolitano a short time ago.

It was of course the former who headed into proceedings boasting the advantage in the table, sitting two points clear of Barcelona at the division’s summit, whilst boasting a game in hand.

And, when Luis Suarez opened the afternoon’s scoring with a wonderful right-footed finish, Diego Simeone’s men looked primed to extend the gap:

Luis Suarez continues his phenomenal season as he puts Atleti ahead in the derby with the outside of his right foot! 🔴⚪

Champions Real, however, can never be counted out, and, despite leaving it late, eventually hit back.

The identity of the man to level things up came as little surprise, as a concerted push on the part of Los Blancos resulted in Karim Benzema sweeping home into an empty net from close range, three minutes from time:

Brilliant from Benzema and Casemiro, and the No. 9 applies the finish ⚪ pic.twitter.com/4kiN1m6bDz

This proved the game’s final telling moment, as Barcelona proved the biggest beneficiaries of a tense derby stalemate.

In turn, on the back of proceedings coming to a close at the Metropolitano, it has since come as little surprise to see point-saving Benzema grab the majority of the headlines.

The contributions of one Real star to have gone largely under the radar, however, are those of Casemiro.

The Brazilian was once again key to Los Merengues’ comeback this evening, going about his business in the middle of the park with trademark vigour and drive.

It was also his surge forward which ultimately resulted in the game’s equaliser, as Casemiro kept his head to square for the waiting Benzema to slot home.

And this proved just the latest in what is quickly becoming a lengthy string of moments in which Real’s midfield enforcer has stepped up to the plate when it mattered most.

Back in December, Casemiro was also on target as Zinedine Zidane and co. got the better of Atleti in a derby clash at the Bernabeu, whilst the midfielder’s last-gasp goal and assist versus Borussia Monchengladbach back in October proved critical in keeping his side’s Champions League campaign alive.

No player won more duels (11), made more tackles (6), created more chances (3) or made more interceptions (2) in the Madrid derby than Casemiro.

And he came up clutch with the assist for the equaliser. 😤 pic.twitter.com/LgHpdDB4oN

CJ Koome, UNODC say to focus on the vulnerable under new...