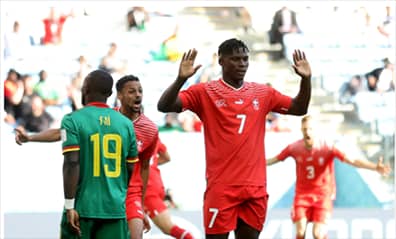 Cameroon’s tale of woes at the World Cup has again been elongated as the most constant African team at the global event again lost 1-0  to Switzerland on Thursday.

It the eighth successive loss that the team has recorded at the World Cup.

The indomitable Lions last won a World Cup match when they defeated Saudi Arabia 1-0 at the Saitama Stadium in Japan on 6 June 2002.

Samuel Eto’o, now the chieftain of Cameroon football governing body scored the solatary goal to be the last player to score a winning goal for Cameroon at the World Cup.

At South Africa 2010 and Brazil 2014, Cameroon lost all their six matches as well as their last match at the 2002 World Cup.

The losing streak was further switched on by Breel Embolo who scored for Switzerland in the 48th minute.

Who Let the Underdogs Out? Arab and African Teams in the...