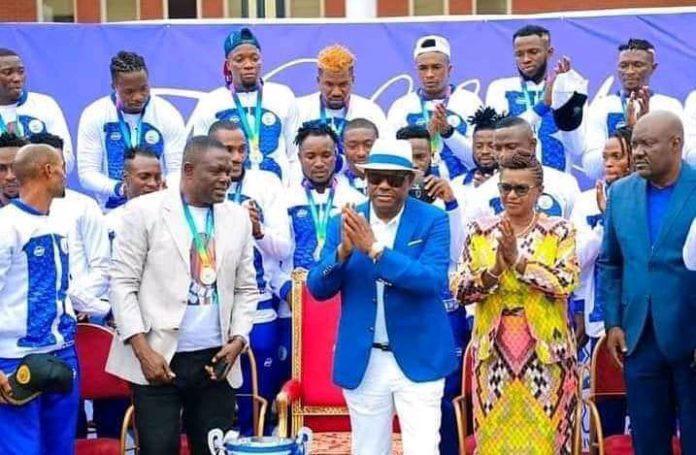 The State governor, Nwesom Wike had promised each player the sum of $40,000 each if they sail through to the group stage of the competition after a slim 2-1 advantage in the first leg in Nigeria.

But the 10-man Rivers United sojourn to Morocco ended up in futility as they suffered a humiliation 6-0 to competition defending champions Wydad Casablanca.

Rivers United goalkeeper Seidu after getting firm hold of the ball, made a body collision with a Wydad players who expectedly fell down. The referee awarded a penalty and gave Seidu a marching order.

After a goalless half hour, El Amloud gave the host a deserved lead in the 32nd minute before Jabrane made it 2-0 just before the half time.

The hosts continued their dominance early in the second half asbB.J Sambou increased the decifit to 3-0 in the 49th minute.

Sambou completed his brace in the 56th minute and Jabrane also did the same in the 69th minute to make it 5-0.

Ahadad completed the rout in the 90th minute and handed Wydad a 7-2 aggregate win over Nigeria’s champions Rivers United.

DISGRACE: Heartland FC Chased Out From Hotel In Owerri Over Unpaid...

Ministry Wades in to stem crisis