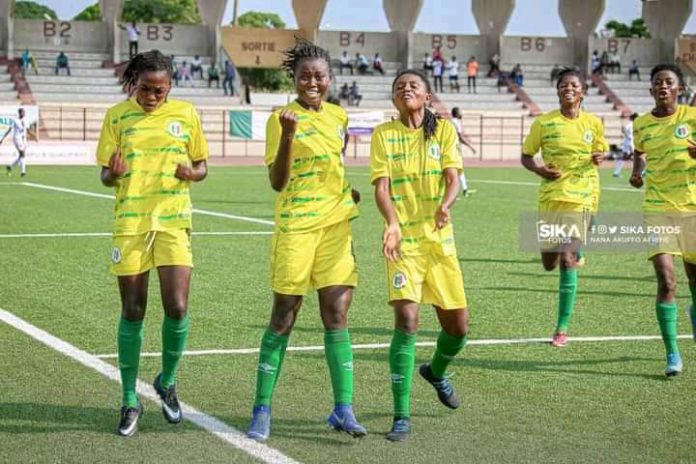 Hasaacas Ladies commenced the game on a good note as they staged intense pressure on their Nigerian counterparts to score twice before the break.

Coach Yusif Basigi made only one change in his squad list that defeated Burkina Faso outfit USFA in the semis as newly-signed Rahama Jafaru returned to the starting line after warming the bench in their last two matches — against AS Police and USFA — in the tourney.

Basigi’s attacking approach yielded results for his outfit in the grand finale with four attackers namely Veronica Appiah, Evelyn Badu, Doris Boaduwaa, and Milot Pokuaa in the lineup. Hasaacas Ladies opened the floodgate on the first minute through a fine strike from Veronica Appiah after Rahama Jafaru’s attempt had been denied by the woodwork.

Rivers Angels gained possession to dominate the game few minutes after conceding as their first attempt won them a free-kick which was just 20 meters from the Hasaacas Ladies’ penalty box.

A defensive error of Hasaacas Ladies gifted River Angels the leveler through a powerful drive from Vivian Ikechukwu on the 10th minute of the game. With just ten minutes away from the break, Hasaacas Ladies were forced to make an early substitution after Milot Pokuaa picked up an injury which got her being replaced by Success Ameyaw.

The Hasmal ladies looked more dangerous upfront as they bossed the middle to dictate the game with brilliant passes and long-range crosses.

On the 41st minute, Perpetual Agyekum restored the lead for Hasaacas Ladies with a stunning free-kick which saw Rivers Angels goalkeeper struggling on her feet in the sticks. Hasaacas Ladies held on to a 2-1 lead ending the first department of the game at the Stade Champroux in Abidjan.

In the second half, Hasaacas Ladies thwarted every inroad from their opponents to avoid conceding as it happened early. Lanky defender Azumah Bugre registered her first goal of the tournament with an audacious long-range strike to seal their resounding win over Nigerian giants Rivers Angels FC.

D Tigers -Nigeria is Proud of you – Minister