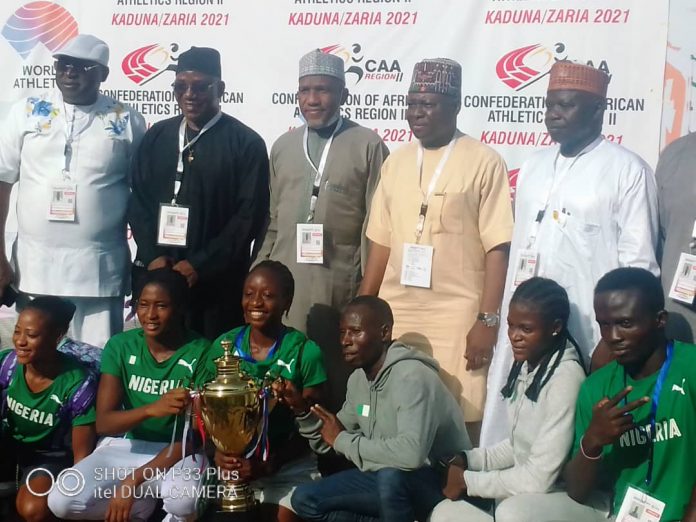 Burkina Faso and their neighbours, Senegal came second and third winning 15 and 11 golds respectively in a fiercely contested field and track events that saw nine West African countries competing in Senior and Junior categories in athletics.

15 countries were earlier expected to feature in the 2021 edition of CAA Championship but only nine could make it to Nigeria mainly due to global COVID-19 protocol that requires vaccination of international travellers.

Nations that featured in this year’s edition tagged Zaria 2021 are; Benin Republic, Burkina Faso and Ghana.

Others are; Guinea Bissau, Liberia, Niger, Nigeria, Senegal and Sierra–Leone.

In his closing remarks, Vice President of CAA Region II, Engr. Ibrahim Shehu Gusau urged stakeholders to invest in sporting activities, especially athletics which according to him would ensure a healthy, vibrant and economically buoyant generations, pledging to continuously hold the competition every year until Region II athletics dominate Africa and the world in performance and achievements.

Gusau, who also doubles as President Athletic Federation of Nigeria (AFN) revealed plans to establish a world-class high-tech performance center in collaboration with ABU Zaria aimed to accelerate standard and bring out talents in local athletes, putting them on global pedestal.

He noted that his policy for Region II was to take athletics to higher level, disclosing that marathon and other events had featured in Zaria 2021 to add glamour and innovations which he said were necessary for sports development and preparing Region II athletes for global completions such as the olympic among others.

Former Nigeria’s Minister of Sports, Barr. Solomon Dalung advocated the revival of secondary and tertiary institutions athletic activities, saying it would go a long way in filling the gaps that had been created due to a near absence of sporting activities in Nigeria’s centres of learning.

Vice Chancellor of ABU Zaria, prof. Kabiru Bala lauded kind gestures of CAA Region II for choosing his school as host community for the sporting event, while calling for closer ties with the Athletics Federation, the University don challenged undergraduates to dedicate more time to extracurricular activities, saying they may become international stars after studies.

High Consultant of the event, Former Federal lawmaker, Shehu Bawa ABG affirmed determination of CAA Region II executives to be consistent in staging the competition annually despite logistic challenges, pledging to commence preparation for hosting next edition immediately inorder to have a first class sport fiesta.

According to the Medals Table released after the competition, Guinea Bissau was the only participating nation without winning a single medal, while Liberia which was 8th on the table managed to secure 4 bronze in all categories.

Niger beat Sierra Leone which got 3 medals to occupy 6th position with one gold, three silvers and 8 bronze.