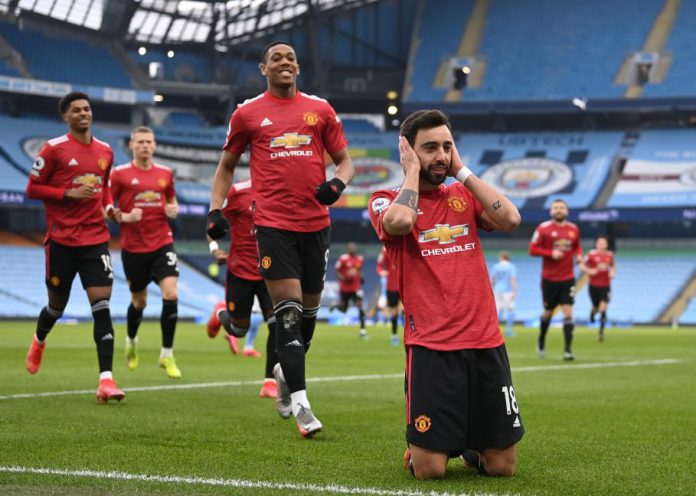 The early spot-kick netted by Bruno Fernandes in the Manchester derby this evening saw visitors United halt their rivals’ pursuit of a long-standing English top-flight record.

The marquee fixture of the Premier League weekend is of course currently playing out at the Etihad.

The matchup in question sees Manchester rivalries renewed, as City and United face off in a hotly anticipated showdown.

It is the hosts who headed into proceedings as overwhelming favourites to secure all 3 points, amid a historic spell of form, which had seen Pep Guardiola’s men rattle off 21 consecutive wins across all competitions.

United, on the other hand, were winless in their last three, all of which ended in 0-0 stalemates.

LONDON, ENGLAND – MARCH 03: Marcus Rashford of Manchester United reacts during the Premier League match between Crystal Palace and Manchester United at Selhurst Park on March 3, 2021 in London, United Kingdom. Sporting stadiums around the UK remain under strict restrictions due to the Coronavirus Pandemic as Government social distancing laws prohibit fans inside venues resulting in games being played behind closed doors. (Photo by Sebastian Frej/MB Media/Getty Images)

As they say, though, form goes out the window on derby day.

And the opening exchanges of this evening’s Etihad clash went on to prove exactly that.

Remarkably, inside two minutes, visitors United took the lead, when Bruno Fernandes stepped up to convert from 12 yards after Gabriel Jesus was adjudged to have fouled Anthony Martial in the City box:

It’s a dream start for United at the Etihad!

As outlined above, though, Fernandes’ latest strike did not only prove significant in the context of putting the visitors ahead in the derby.

It also saw the Portuguese bring an end to a remarkable record-chasing run on the part of Pep Guardiola and co.

After putting Wolves to the sword on Tuesday night, it was revealed that City had not fallen behind for a single minute in any of the club’s last 19 Premier League fixtures.

This marked a record-equalling feat, after Arsenal also racked up a 19-game streak during the 1998/99 campaign.

19 – Man City haven’t trailed for a single minute in any of their last 19 Premier League games – equalling Arsenal’s competition record of 19 consecutive games without falling behind, set between December 1998-May 1999. Relentless. pic.twitter.com/qg4EvDyVC9

United’s quickfire opener this evening, though, evidently halted City’s run with immediate effect, with the Sky Blues forced to make do with joint ownership of the long-standing record.

City are looking for a 22nd successive win while United, coincidentally, will be looking…

GABRIEL JESUS REACTS! | GOAL CELEBRATIONS | Phone home… and tell them to watch this!