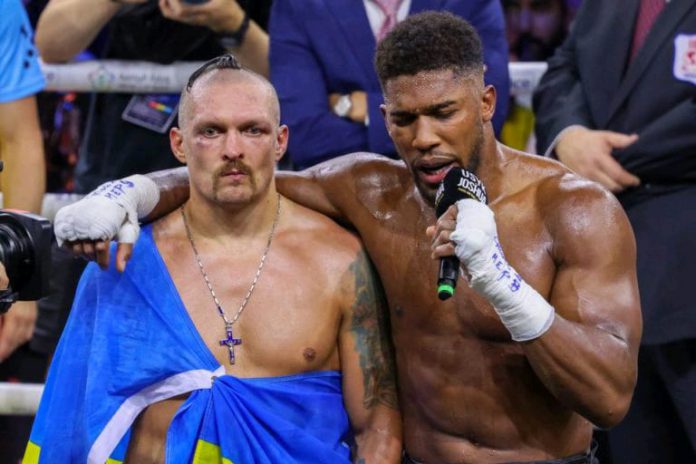 ANTHONY JOSHUA is training in America for his next fight as he “can’t breathe” in the UK, says Eddie Hearn.

And the Matchroom promoter has also insisted that the two-time heavyweight champion will return “reinvigorated” in four months’ time.

AJ is aiming to bounce back after two crushing defeats to Oleksandr Usyk.

Ahead of his rematch with the Ukrainian in August, the 33-year-old opted to bring in Robert Garcia as his coach.

Despite looking a lot more aggressive than in his first loss, Joshua opted to replace the renowned Garcia after that bout.

Hearn confirmed this week that the boxing star has chosen a new man to lead his training camp, which will begin in America next week.

However, he has now revealed the reasons why the 2012 Olympic gold medallist is heading Stateside to prepare for his comeback.

Remaining tight-lipped on the identity of the trainer and opponent, Hearn told The DAZN Boxing Show: “April 1 is the targeted date in London. I have a call (today) to go through the final list of opponents, the final bits and pieces around the date. We’re almost ready. He’s excited.

“I’m happy with the trainer. I’m happy with anybody that makes AJ feel comfortable, feel motivated, feel excited, and I think this is gonna be a nice break.

“The problem is, being in the UK, he can’t breathe. When he goes to America, people still know who he is, but it’s just a different world.

Read more: anthony Anthony Joshua admits he is ‘out of title race’ as he plans next step

“Can you imagine, that Anthony Joshua, where he’s gonna be training, can rent a house or stay in a hotel, and can go for a walk and go and sit in a coffee shop and have a bit of breakfast and a bit of coffee with some friends, and yeah, someone might come over and go, ‘AJ, man, how you doin’?’ But literally, that is an impossibility (in the UK).

“He can go to the mall and have a nice stroll around and pop into Foot Locker and just be normal. Like, live a normal life that people should be allowed to do. It’s just a pressure cooker.”

“You don’t realise how much that’s going to drain you when you’re doing two or three sessions a day.

“I think it’s gonna be really good for him. I really feel like you’re gonna see a reinvigorated Anthony Joshua in April and I can’t wait to see him back.”

Benzema To Rest For World Cup