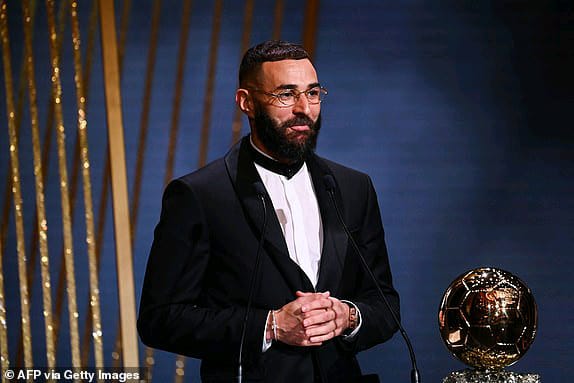 Karim Benzema reached the pinnacle of football when he won the Ballon d’Or last night. It is an award that he has seen his Real Madrid teammates win on several occasion.

. Cristiano Ronaldo lifted it four times during his time at Santiago Bernabeu while Luka Modric won it on one occasion as well. Now, it is time for the Frenchman to bask in the applause.

He has definitely earned it as well. Not many people could have predicted that the same player who scored just 5 league goals in a season not too long ago would be standing on top of the Ballon d’Or podium at 34 years of age.

This is a terrific achievement for him to say the least and also continues Real Madrid’s incredible legacy when it comes to producing Ballon d’Or winners.

In fact, it looks like Benzema’s idol was a former Real Madrid star, who won the Ballon d’Or himself, when he was just 20! Yes, it is none other than Ronaldo, who is considered by many as the most naturally gifted footballer to ever step on a pitch. And the Frenchman decided to pay tribute to him on his big night.

As reported by AS, Benzema said in his speech after receiving the Ballon d’Or:

“Ronaldo knows he is my idol. There was no striker like him. What he did on the pitch was impossible to repeat. He’s history, he’s the only striker that if I was on the bench and he was starting, I wouldn’t say anything. It’s an impossible level to reach. He’s history, not just for me, but for all strikers.”

Of course, Ronaldo is regarded as an idol by many players all over the world. Some of the things that he could do on a football pitch were simply incredible.

Not only did he play for Real Madrid but Barcelona as well, where he had his greatest individual season. Another set of rivals that the Brazilian represented during his storied career are AC Milan and Inter.

The only flaw in his game was the fact that he picked up a number of serious injuries throughout his career which ultimately cut it short.

‘Ramaphosa not infallible or beyond criticism’ – Mbalula [Video]